Golden Jaguars to strike a major deal with Capelli Sport

The Guyana Golden Jaguars is on course of striking a huge sponsorship deal with Capelli Sport, a major brand worldwide. This was disclosed by President of the Guyana Football Federation, Wayne Forde while speaking with members of the media on the sidelines of the FIFA Development Conference at the Marriot Hotel. 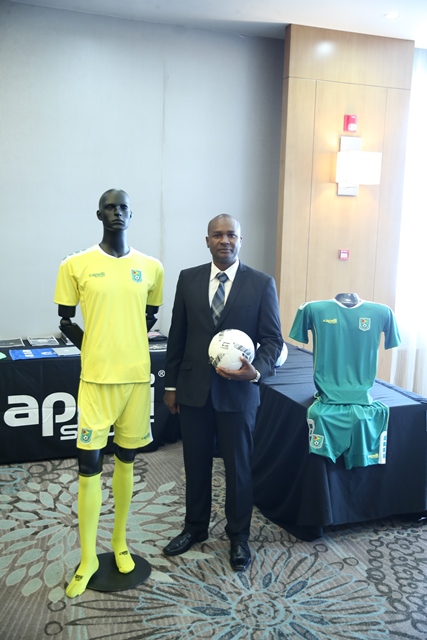 Capelli Sport is an American brand and is a major sponsor to more than 90 international clubs across the world. Some of the teams the brand currently sponsors include, AEK Athens Football Club, USL Championship and MSV Duisburg soccer team among others.

The sponsorship deal is expected to boost the level of football being played in Guyana. Forde also pointed out that with the partnership, the Golden Jaguars will be sporting new playing kits during their run at the Concacaf Gold Cup.

The Jaguars will be sporting a golden yellow suit and a green suit respectively. Forde said that the change of attire comes following engagement with Capelli Sport, a future partner with the GFF. He said the fact that Capelli Sport was at the conference displaying the new attire and engaging with local football fraternity signals their commitment to working with the GFF.

“At the heart of our discussion has been where we are as a federation and the support that we need to grow our football from the grassroot level, all the way up to the senior team, so we are pleased so far with the engagement we have been having with Capelli Sport and we look forward to a fruitful couple of years and we will make a final announcement of the deal in one week’s time,” he said.

Forde also pointed out that during the announcements, to be made shortly, some key agreements between the GFF and Capelli Sport will be disclosed.

On March 23, the Golden Jaguars roared their way into their first-ever Concacaf Gold Cup after defeating Belize two goals to one. Guyana has been drawn in Group ‘D’ of the Concacaf Gold Cup, alongside the United States of America, Trinidad and Tobago and Panama. The Jaguars will play the USA on June 18 in Minneapolis, Panama on June 22 in Cleveland and Trinidad and Tobago in Kansas City on June 26.