In Guyana, mangroves provide protection for over 90% of Guyana’s population who live within naturally low-lying flood prone areas along the coast.

Given the fact that Guyana’s economic well-being is tied to the safety and protection of coastal resources and land, the National Agriculture Research and Extension Institute’s (NAREI) Mangrove Restoration Project intends focus its 2019 restoration activities on creating mangrove environments in Regions Two and Four respectively.

This was disclosed by Coordinator of the Mangrove Restoration and Management Department, Kene Moseley, who said these activities will be executed through the construction of groynes.

“A 200 metre geotextile groyne will be constructed in Region Two at Anna Regina to accelerate the accretion process and increase shoreline elevation to a level that will support mangrove restoration.  In Region Four, a 240 metre rubble mound groyne field will be constructed along the foreshores of Beterverwagting and La Bonne Intention, East Coast Demerara,” Moseley said.

In 2019, government allocated funds to the sum of GY $98.5M to cover costs attached to increasing the resilience of coastal communities through the restoration of Guyana’s natural sea defences.

In 2018, mangrove restoration activities focused on mangrove seedling planting and coastal infrastructure as interventions to promote and encourage sedimentation and natural regeneration.  The project included the completion of 700 metres of brushwood dam field at Aberdeen and Columbia and the planting of 14,876 Avicennia germinans seedlings along a 300 metre stretch at Walton Hall, Essequibo Coast, Region Two.

Guyana’s coast lies below sea level and is protected by 370 kilometres of sea defences, 80 kilometres of which are defensive structures that range from earthen banks to concrete walls. The vulnerability of the coastal zone is made more acute by predictions of a rise in average sea level driven by climate change.

Mangroves play a vital role in defending Guyana’s coastline from the rising sea level. This is particularly important for communities which are most vulnerable to natural disasters.

Agriculture Minister Noel Holder noted that Guyana has developed a Sea and River Defence Policy, which calls for alternative solutions to the traditional ‘hard structures’.

“This includes the restoration of mangroves for effective flood defence, and to protect environmental resources. The construction and maintenance of man-made sea defence structures costs millions of US dollars. Although Guyana is fortunate and has never experienced extreme natural disasters like hurricanes and tsunamis, research indicates that communities with considerably more mangroves have reduced impacts,” Holder said.

At least ten agencies are involved directly or indirectly in the management of mangroves in Guyana. The principal agencies are the Sea and River Defence Department (S&RDD), the Guyana Forestry Commission (GFC), the Environmental Protection Agency (EPA) and the Ministry of Agriculture’s Fisheries Department. Other agencies include the Georgetown Sewage and Water Commission, the National Drainage and Irrigation Authority (NDIA) and the Civil Defence Commission. 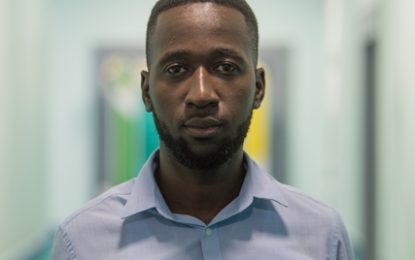 Author Details Kellon Rover Author email kellon.rover@dpi.gov.gy DPI, Guyana, Wednesday, February 19, 2020 From the 750 spots allocated for vending along the Mashramani route on February 23 350 are still available. This was announced by Deputy-Director of Solid Waste Management at the Mayor and... END_OF_DOCUMENT_TOKEN_TO_BE_REPLACED