Citizens who rely heavily on ferry services in the communities of Mazaruni, Supenamm and Morawhanna will soon benefit from improved services as rehabilitation works are set to commence shortly on the stellings and wharves. 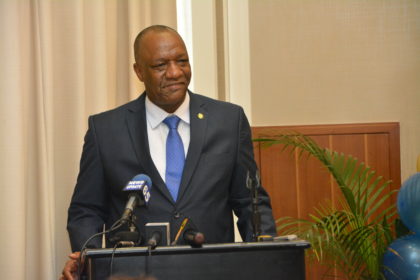 Earlier in the year during the Ministry of Public Infrastructure’s end of year review General Manager, Transport and Harbours Department, Marcelene Merchant announced that the Mazaruni Wharf and Dockyard are currently in a dilapidated state and needs urgent rehabilitation. The dock was last rehabilitated in March of 2014. She further stated that at the Morawhanna Stelling the entire bond and wharf will be rehabilitated and the fender system will be reconstructed.

The Minister of State noted that these upgrades are necessary especially for the Supenamm Stelling since it is the main point of entry particularly for goods and services into Region Two.

“It is important that we always keep it (Supenaam Stelling) at a high state of maintenance, several years ago, when there was a problem where long lines of trucks were lined up for days trying to get to and from Region Two and it is part of our responsibility to ensure that every region of this country is provided with a reliable form of transportation for their goods and services,” Minister Harmon explained.

Some $291M will also be spent on the acquisition and installation of a proportion system for MB Sandaka. A contract for that amount has also been approved by Cabinet.

In February, 2016 the M.V. Sabanto, collided with the Roll-on/roll-off (Ro/ro) mooring facility at Supenaam Stelling whilst maneuvering to berth.  This collision resulted in the misalignment of the floating pontoon and linkspan bridge, severe damages to structural steel beams and displacement of the mooring cluster piles.  Consequently, emergency repairs to the tune of $6.6M were undertaken to correct the defects.