─ “He [Prime Minister Nagamootoo] is a very important person, he is the leader of Government Business in the House and we will not sit and accept that so we decided to leave the Chambers” – Min. Hastings-Williams

Government Members of Parliament, this afternoon, walked out as the Opposition Leader began his presentation during the 2019 Budget Debate, as a show of solidarity for Prime Minister Moses Nagamootoo, whom the opposition “disrespected” this morning. 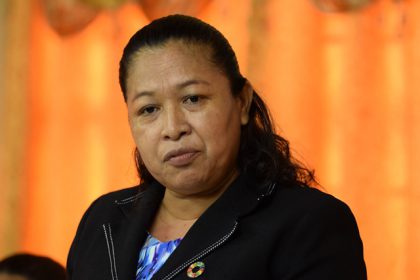 Minister of Public Affairs, Dawn Hastings-Williams, speaking to the Department of Public Information (DPI), said at every opportunity the Opposition has, it is used to ridicule the Prime Minister and his office.

“He [Prime Minister Nagamootoo] is a very important person, he is the leader of Government Business in the House and we will not sit and accept that so we decided to leave the Chambers,” she explained.

The minister pointed out that often times the Opposition Leader does as he pleases, leaving and returning to the House at his convenience.

“They continue to disrespect the Prime Minister and that is unacceptable,” she added.

During today’s debate, Opposition MP, Anil Nandlall, told the House that PM Nagamootoo has no portfolio, a comment which was immediately rebuked by Minister of State, Joseph Harmon.

Minister Harmon said such behaviour towards the Prime Minister should not be condoned.

Despite the other Government MPs walking out of the Chambers, Prime Minister Nagamootoo remained for the Opposition Leader’s presentation.