Minister of Foreign Affairs, Carl Greenidge today stated that his Ministry is engaging relevant agencies and ministries to embark on public awareness initiatives of the Guyana/Venezuela territorial controversy.

The Minister explained that too many Guyanese, particularly young people, are not knowledgeable about the issue, as opposed to those in Venezuela. 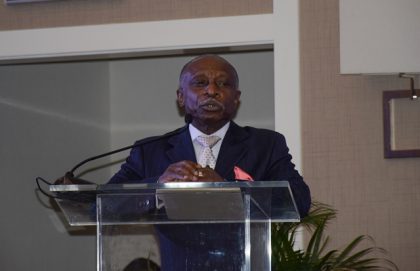 “The interest does not seem to be where it should, and I think a lot of older folks who are aware of the issue are perhaps now a little satiated and many of the younger folks are unaware of the significance of the issue. So we have to do what we can and one of those things is to use the relevant medium to get the information out there,” Minister Greenidge underlined.

The longstanding controversy started during the second half of the nineteenth century, between Venezuela and Great Britain over the location of the border between its colony of British Guiana and the Spanish-speaking country. It continued until an Arbitral Tribunal was empanelled in 1897 to determine the borders and issued an Arbitral Award on October 3, 1899.

A boundary commission made up of representatives from Great Britain, Venezuela, and Brazil agreed on the specific point on Mount Roraima where the boundaries of British Guiana, Venezuela, and Brazil met. A concrete marker was erected soon after. The matter was permanently settled.  Venezuela’s Minister of Foreign Affairs, Esteban Gil Borges in 1941 agreed that the frontier with British Guiana was well defined and was a closed issue.

However, in 1962, Venezuela, unilaterally and without any basis or evidence, announced that it regarded the Award of 1899 as null and void.

The Foreign Affairs Minister stressed that all Guyanese must be well-informed of the facts surrounding this controversy and also impart this knowledge to the future generations.

Minister Greenidge recalled that during 2016, the Ministry had contracted an agency to produce a film on the controversy which was to be broadcast on the Guyana Learning Channel. However, this initiative was unsuccessful and the Ministry has put in place measures to attempt this venture again, so that, “Guyanese become aware of this matter”.

Minister Greenidge emphasised that the issue will not be represented by the Attorney General and his chamber; rather an international team will represent Guyana’s case when it goes to the International Court of Justice (ICJ).

“You require expertise in different areas in terms of what the court will look at, treaty issues, border issues, so we will choose a team based on that and this will be overwhelmingly an international team,” the Minister explained.

The government has set aside US$15M for legal fees in this regard.