Gov’t will work with Region Two to make it a more competitive producer,  exporter – Minister Gaskin

Minister of Business Dominic Gaskin said that Region Two has a clear future in the agriculture and agro-processing sector. He made the observation in light of the recently concluded Essequibo Agro and Trade Expo.

The Business Minister said that this future was clearly demonstrated in the range of exhibitors that participated in the expo.

Minister Gaskin told the Government Information Agency (GINA), that the government would like “to see Region Two become a more competitive producer and exporter of agricultural products. We are therefore prepared to work with this Region to achieve the full potential of its agriculture sector.”

The first Essequibo Agro Trade Expo hosted by the Essequibo Chamber of Commerce (ECC) was held on April 7 to 8, 2017 at the Anna Regina Community Centre Ground. The expo saw a number of participants displaying their goods and services from the various sectors of the country. The two- day event saw persons from all walks of life visiting over 30 booths.

Goods and services ranged from doors, kitchen cabinets, hand bags, picture frames, leather slippers, green seasoning, and a variety of achar and pepper sauces, coconut water, and information on how to start and maintain a business, among other goods and services.

Barakat Timbers Ltd- This Company was established in 1993 and is located in Charity, Pomeroon. Director, Imtiaz  Barakat said that the manufacturing of doors and kitchen cabinets was recently started. Barakat said that “whatever ends that is left over in the saw mill that is what we take and manufacture these items; nothing is going to waste.” The doors and cupboards are made from Purple Heart, Tatabu, Crabwood, Kabukalli and locust. Barakat explained that the company is the first in the country to use the Simarupa wood to manufacture kitchen cupboards.

Anita Sankar Crafts– This is owned by Anita Sankar whose place of business is located in Charity. Sankar displayed beautifully crafted Indigenous products including bags, hats, and souvenirs. She explained that she purchases most of her items from the neighbouring communities, while she is involved in “making process” as well. Sankar expressed hope that the Expo will boost her business.

Roy’s Quality Spices is located in Adventure, Essequibo Coast, Suddie, Anna Regina and Mon Repos market. The company originated in 1996. Sales and Marketing Manager, Govinda Singh said that his father traded the “raw spices” for a living. One day Singh said a gentleman asked him if he could grind the spices for him so that the he can take them overseas. Singh said that initially the raw materials were ground with a hand mill but has since elevated to an electric mill and other modern equipment. Following his grandmother’s methods, Roy’s spices include turmeric, jerk seasoning, halwa masala, and cook- up and chowmein seasoning.

Chief Executive Officer of Amy’s Pomeroon Coffee, Louis Holder, said that his coffee is one of the oldest blend in the world. He said that it was introduced into the colonies of Berbice, Demerara and Essequibo by the Dutch in 1721. By 1810 British Guiana was one of the largest exporters of coffee in the world. Holder explained though that during that period a variety of coffee was planted on high elevation, while his coffee is growing on low elevation, he said that when farmers plant the farmers plant on low elevation, their yield decreases. “When your yield decreases your cost is higher,” Holder said. Holder highlighted that for the last three centuries coffee has been grown. Holder said that his blend is “straight forward” and the company prefers the local coffee houses to add flavourings of their choice. The CEO said that when a person takes their first cup of coffee,” they should feel good, it gives you energy for the rest of the day, it makes your day and we recommend it at breakfast,” Holder said.

Aunty Pam stated that their Black Sauce is a “hit”. She explained that the syrup that remains after processing the carambola fruit is processed into the Black Sauce that can be used to flavour fried rice, chowmein and meats. She said that “she is proud of the women that work with her on a daily basis.”Aunty Pam told the Government Information Agency (GINA) that all the ingredients for their production are locally sourced from the farmers in the Pomeroon and the Charity Market. The Head of the Association encouraged Guyanese to support more local produce and producers. She explained that such “an act” supports the economy and more importantly the livelihood of the farmers and producers.

Amazon Tropical Coconut Water commenced operations in January 2017. Ed (only name given), CEO said that his company is located in the Pomeroon. He said that there is no artificial flavouring in his product, “it is 100 percent natural and simply your choice.” Ed said that the response to his product since the launch has been overwhelming and they are currently working on acquiring export markets. The process to the finished product is very simple Ed explained. He said that he will continue to upkeep the high standard of his product.

National Milling Company of Guyana Inc. (NAMILCO) – Affeeze Khan Marketing Consultant said that the response to their presence was “very good”. He noted that some patrons were not aware of the variety of products that the company produces. Khan expressed confidence that the Expo would boost business.

The Expo also saw a number of services being provided. The Guyana Geology & Mines Commission (GGMC) was present as well as the Ministerial Task Force on Trafficking in Persons  and the Institute of Distance and Continuing Education.

Beatrice Roberts – Austin- Social Information Officer said that the GGMC aimed at the Expo was to bring awareness to persons especially miners who were present at the Expo about safe practices in the mining sector, tips on protecting the environment when mining and how important declaring production is.

The Ministerial Task Force on Trafficking in Persons (TIP) was also present at the Expo. Coordinator of the Ministerial Task Force on Trafficking in Persons  ,Olilver Profitt (ag), said that even though it was an Agro Expo, TIP is a huge business and can take place in any sector. He said that the response to the booth was overwhelming and that awareness campaigns need to take place all around.  Small tokens were given away for the correct answer to questions relating to TIP at the Expo booth.

Institute of Distance and Continuing Education (IDCE ),Tagebrithe Singh Jaichand- Administration Assistant said that their presence at the Expo was to highlight the courses that are being offered at IDCE which includes, cake decorating, home management, tailoring among other courses. While the University of Guyana was also in attendance with a similar aim to share information on the courses that the University offers and encourage person to acquire a tertiary education.

President of the Essequibo Chamber of Commerce, Mr. Daleep Singh, said that the chamber will push government and private sector collaboration as a key aspect for the development of the region.

The Head of State added that despite many challenges, there is great potential for economic development to take place through unity among all stakeholders. 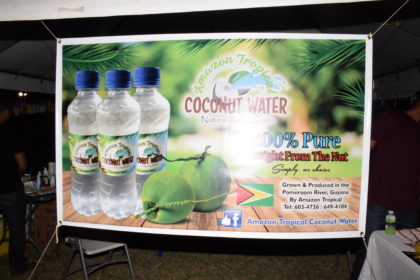 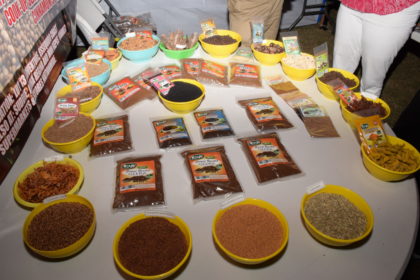 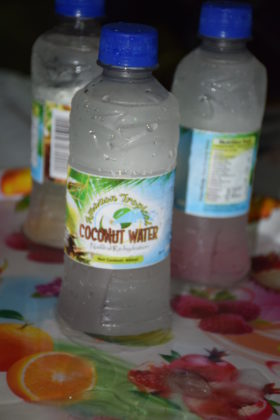 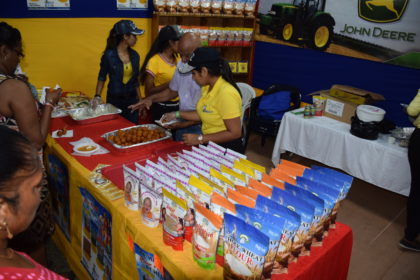 Products on display at NAMILCO booth 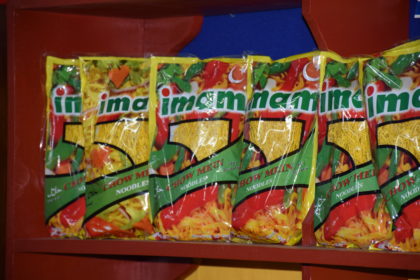 Products on display at NAMILCO booth

A variety of rice produced in Essequibo 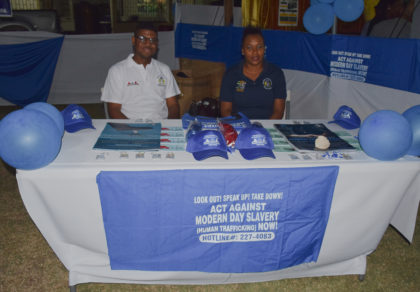