The DCEO who was briefing the media on the reason for the recent blackouts at a press conference today, at GPL said there is sufficient capacity to meet peak demand during the holiday season. 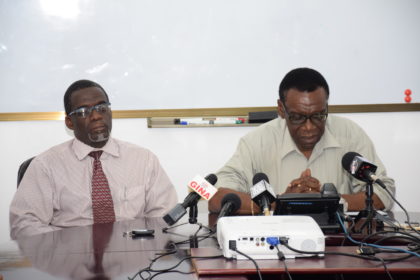 Marshall pointed out that to date there are 112Megawatts (MW) of generation capacity while the peak demand in December is expected to be 109MW.

The DCEO noted that even though there is not much reserve currently, there will be, in time for the holiday season.  He explained that the maintenance of the Wartsilla unit at Garden of Eden which was expected to last 14 days but, “unfortunately following the inspection it was recognised it was realised Wartsilla needed to have the piston crowns and cylinder wires repaired.”

The equipment for the repairs were ordered and should have been air shipped since last week, but due to the Christmas rush the air freight company could not have shipped it on time and it is now expected tonight, Marshall noted. This will see an additional 5.5MW before Christmas.

Additionally, the CEO outlined that the Vreed-en-Hoop station’s cable has been fixed and the Demerara-Berbice Interconnected System (DBIS) now has capacity to satisfy the demand in Berbice and Demerara.

Meanwhile, in outlining the reasons for the recent blackouts, Marshall explained that one of the feeders at the Kingston Plant had a failed conductor. “It burnt off and fell across another line which is fed from Sophia, and as a result the line linking the Kingston and Sophia sub-stations tripped on over current and this led to total outage of the system.”

Marshall said it took the company approximately three hours to restore the system to normalcy, which is slightly longer than they would take. “But, there are times in restoring the systems we get to a certain stage and we run into a problem and the system comes down again which is when GPL is accused of providing ‘fairy’ lights.”

For the power failure on Friday December 16, 2016 the power company had experienced a failed insulator problem. Subsequently the feeder that provides electricity to Alberttown, Queenstown and other nearby areas along Thomas Street went down and there were power outages in large portions of those areas including the Georgetown Public Hospital Corporation (GPHC).

“What we managed to do is to provide alternative electricity from another feeder to provide GPHC and those areas with electricity in the interim,” Marshall explained.

On Saturday, December 17, 2016 two of the feeders from the Kingston plant became entangled. Subsequently because of the entanglement, the Kingston plants were overloaded and tripped. Marshall said “it took us a while to sort out that problem but the situation was remedied.”

The final power outage on Sunday, December 18, 2016 was as a result of the tripping of the power transformer at Kingston which converts power from generators. Additionally, a cubicle at Kingston suffered from installation failure which resulted in severe damage, causing the power company to take the generation set out to service and complete the repair.

Marshall explained that GPL usually conducts regular maintenance on the feeders and, “just before the Christmas season we intensified this programme …do inspections, deal with vegetation and try to have the network in a condition that would not present faults.

He further explained that the power company cannot consider collaborating with the Giftland Mall for additional electricity because the timings they offer are not in sync with the peak demand of electricity.