President David Granger, this evening, said that Guyana shares a common desire with China to deepen and strengthen economic relations and trade as he noted that China plays a key role in the country’s development. The Head of State was at the time speaking at a reception held in honour of the Chinese National Day, which was held at the New Thriving Restaurant, Providence. 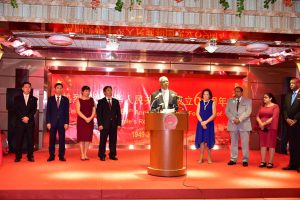 In his remarks, President Granger said that since Guyana and China established diplomatic relations in June 1972, the two states have maintained mutually beneficial, high-level and friendly relations for forty-six years based on mutual respect, mutual non-interference in each other’s internal affairs and cooperation for mutual benefit.

“Guyana recalls its principled support for United Nations General Assembly Resolution 2758 of October 1971 which recognized the representatives of the government of the People’s Republic of China as “the only legitimate representatives of China to the United Nations.” Relations have been cemented through continuous cooperation in culture, defence, education, energy, health, infrastructure, medicine, mining and other fields.  This was most evident during the recent visit of His Excellency, Wang Yi, State Councillor and Minister of Foreign Affairs. During that visit Guyana and China seized the opportunity to strengthen our programme of cooperation for the mutual benefit of both states,” he said. 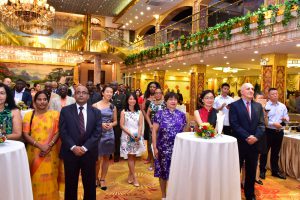 recapitalization of the Defence and Police Forces.

“The Belt and Road initiative is a strong indicator of China’s transformative vision for the world. Guyana signed a Memorandum of Understanding to cooperate within the framework of the Initiative.

We welcome increased Chinese investment. We are committed to ensuring a safe and secure environment for all investors. International environmental cooperation, in the context of the threats posed by climate change and natural disasters, is an urgent necessity. We look forward to learning from China’s experience in protecting the environment and in mitigating the adverse effects of climate change. Guyana and China have much to celebrate,” the Head of State said.

Meanwhile, Chinese Ambassador to Guyana, Mr. Cui Jianchun in his remarks echoed similar sentiments as he noted that the relationship between Guyana and China is characterised by friendship and mutual goals. He noted that over the past year, much success has been achieved between the two nations and he therefore looks forward to forging stronger ties. 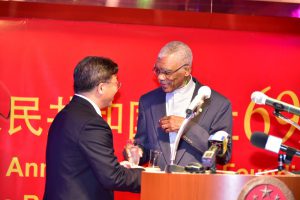 President David Granger shares a light moment and a toast with Chinese Ambassador to Guyana, Mr. Cui Jianchun at the Chinese National Day celebrations this evening

“The relationship between Guyana and China has entered a new chapter. The Chinese Embassy stands ready and willing to provide more and more opportunities for China- Guyana cooperation and greater achievements. With our concerted efforts, the China- Guyana relationship will be even brighter in the new era,” he said.