On Monday, September 18, 2017, the Guyana delegation at the 72 United Nations General Assembly engaged Malta and Costa Rica to strengthen relations between the two countries and explore areas of cooperation.

President David Granger and his delegation, which included Minister of Public Affairs Dawn Hastings-Williams, held bilateral discussions on the sidelines of the General Assembly. 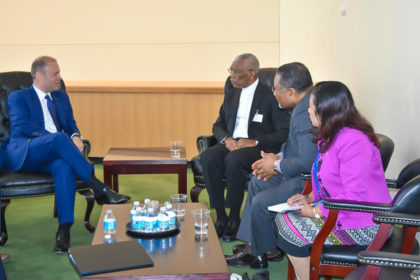 Addressing his meeting with President of Costa Rica, Luis Guillermo Solis, the Head of State noted that Costa Rica is an important player in hemispheric relations and has a role to ensure a peaceful resolution to controversial issues in the region and the hemisphere.

Guyana also sought to “open the door of co-operation” with the Central American and Caribbean country in relation to the protection of the environment.

“Costa Rica has distinguished itself as a major player in the maintenance of the environment and I think we have a lot to learn from Costa Rica”, President Granger noted. 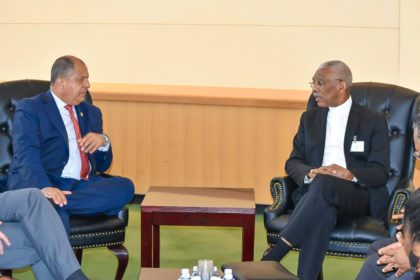 Following his discussion with the Prime Minister of Malta, Joseph Muscat, the Guyanese leader pointed out, “It is a very important maritime state…we (Guyana)want to intensify our cooperation with Malta because we are a low-lying coastal state”.

Another “important element” of discussions with Malta was the protection of the environment and the development of tourism in Guyana. “They have expertise in marketing their tourist product”, the President pointed out.