Guyana has been taking every major step to improve the promotion and protection of the fundamental rights and freedom of its people.

Guyana was among 14 countries that reported on actions taken to improve human rights situations and the implementation of the UPR recommendations posed during their previous reviews. Guyana’s last review was in 2015. 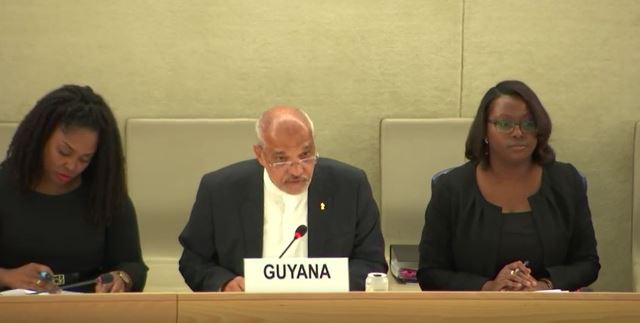 “The government’s commitment to the process and the improvement of the human rights situation in Guyana is tangibly demonstrated in the number of achievements recorded, relating to the implementation of its international human rights obligations and commitments since its last review” Dr Ford told the working group.

He reported that Guyana remains a party to all human rights treaties and considers the UPR a beneficial process which allows engagement with other states in the promotion and protection of fundamental rights and freedom of its people.

In recent years Guyana has maintained steady economic growth. In the United Nations Development Programme’s (UNDP) 2019 Human Development Report, Guyana was classified in the medium human development category with its index value increased from .663 in 2015 to .670 in 2018, positioning the country at 123 out of 189 countries, and up from 127 in 2015.

A breakdown of the figure revealed a steady increase in life expectancy at birth, Gross National Income per Capita and positive trends in health, education, gender, levels of equality and other socio-economic indicators.

According to the UN Ambassador, Guyana has long recognised that human development and well-being are not “divorced” from human rights and human dignity.

Meanwhile, Ambassador Ford noted some characteristics that influence Guyana’s performance in the implementation of the UPR recommendations. Among these are challenges related to the geographic dispersion, multicultural population and its economy and environment. However, he assured, the government endeavors to provide human rights services to all of the administrative regions, including the very remote.

“Guyana is a multiethnic, multicultural and multireligious country. Our government tries to accommodate different views and approaches to family and community norms practised in diverse communities.”