The potential of job and training opportunities for residents of the Matarkai sub-region of Region One, Barima Waini were highlighted last evening at a community meeting in Arakaka. 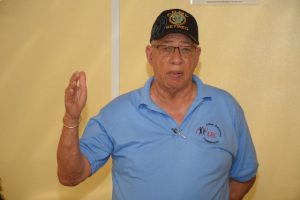 Maclean announced that the delivery of 38 new trucks next week, signalled that work was increasing and that there 554 various vacancies to be filled. The Company Secretary said, “A glorious opportunity awaits you” adding there would jobs available for equipment operators, technicians, mechanics and support staff, along with training opportunities.

The announcement was welcomed by the residents who mainly depend on gold and diamond mining for a livelihood. The company, Maclean explained, will give preference to residents of Arakaka, Matthew’s Ridge and Port Kaituma within the region.

It was explained that GMI, a BOSAI subsidiary, had a successful track record of operations mining bauxite in the Linden area, for the past ten years. The company’s Matthew’s Ridge operations represent an investment of “some US $500 million” according to Maclean. Exporting of the rare earth metal, used in the production of high-tech equipment are on schedule to start by the end of 2019. The mine has a projected lifespan of 15 to 35 years depending on the rate of extraction, using open pit mining methods. It will also see the improvement of critical infrastructure such as water supply facilities, a milling plant, roads and a wharf to accommodate large transport barges.

Manganese was first mined in Matthew’s Ridge in the 1950’s but later abandoned due to high costs and other factors. The increasing use of the rare earth metal in the production of high-tech equipment has seen the restarting of operations. Guyana is believed to have some of the world’s largest deposits of manganese.