Guyana’s future is bright, and it is on the right economic path, according to the Caribbean Development Bank’s (CDB) Director of Economics, Dr. Justin Ram.

Speaking at the bank’s annual news conference in Barbados on Friday, Dr. Ram stated that “the future for Guyana is quite bright.” 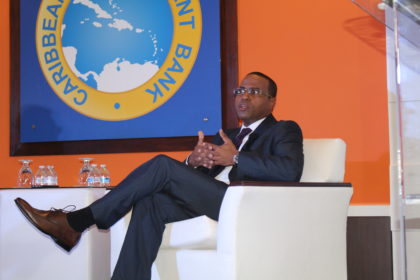 He referenced the recent oil and natural gas discoveries offshore Guyana, and noted that with the expectation that commercial production of the commodities is due to begin in  a few years, there is great potential there.

Sharing his views on the policies being put in place by the Guyana Government, Dr. Ram opined that, “the Government is correct in being fiscally prudent, and very careful in how it manages its debt to GDP (Gross Domestic Product) ratio.” He added that this ratio, which declined in 2016, was quite good and government continued to consolidate fiscally.

The CDB Director noted that Guyana is facing several challenges in the social and infrastructural areas, thus the “Government will now have to consider, how it will go about those financing gaps that the economy now faces.” He said that there are possibly a number of ways to do that without increasing the debt burden significantly. He explained that public private partnerships are an option in this regard.

Dr. Ram explained that whenever a Government borrows funds to execute projects, the returns on these projects must exceed the interest rates on the loans acquired,  “So overall the Government must spend money wisely and get great value for that money, so that the rate of return on those projects, actually provide economic benefits to all of its citizens.”

The CDB official declared that Guyana is “very well poised to take advantage of the recent resources it has discovered, and overall it is important that our Governments spend money wisely, and I think that if these are managed properly, then Guyana could be one of the most diversified economies of our board member countries, so I think it is actually on the right track.”

The CDB Director gave an overview of the Caribbean’s economic performance including an action plan for stability and growth, and policy prescriptions, during the news conference on Friday.