‘Guyana, Our Own’ – raising awareness on Guyana/Venezuela controversy

The Ministry Foreign Affairs launched its public awareness campaign on the Guyana Venezuela controversy with a new song titled “Guyana Our Own”.

The tune produced and sung by Marlon Simon, popularly known as Blaze Anthonio, was debuted at the National Commutations Network Inc. (NCN) studios today. Present at the launch was Prime Minister (ag) and Minister of Foreign Affairs, Carl Greenidge and Advisor to the Ministry, Sir Shridath Ramphal. 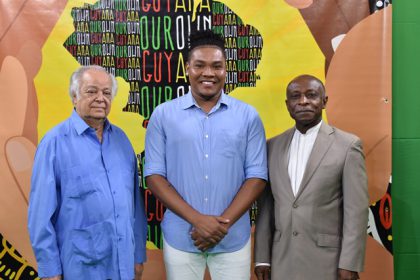 Blaze Anthonio along with Prime Minister (ag) and Minister of Foreign Affairs, Carl Greenidge and Advisor to the Ministry, Sir Shridath Ramphal at the launch of the song at the National Communications Network (NCN) Studio.

Thrilled to be a part of such significant initiative, Blaze Anthonio explained that the song was created to develop a sense of patriotism among Guyanese, especially the youths. “I was given the opportunity to present a more updated song to connect to youths and work as a reminder and let Guyanese to be aware of exactly what is taking place and also empower them and give them that powerful feeling that Guyana is our own.”

Minister Greenidge encouraged all Guyanese to embrace the song in the same way they did with ‘Not a Blade of a Grass’ by Dave Martins which debuted in the 1980s. Both songs are a show of solidarity and raise awareness on the controversy between Guyana and Venezuela.

The minister explained that the song is not a replacement for Dave Martins’ hit, but rather a complement to it. He added, “the issue itself is still with us and I am happy that one of our young citizens of Guyana could help us in such a way by producing a song of such quality.”

Sir Shridath said he was delighted to be a part of the launch of a new rendition which will relate to the new generation, “who I’m sure will inherit the success which lies ahead of us”.

Earlier in the year, the government announced that it will be embarking on a massive public awareness campaign on the Guyana/Venezuela controversy. It was suggested that a song would be most effective, particularly for the younger generation.

The controversy had arisen as a result of Venezuela’s contention that the Arbitral Award of 1899 concerning the frontier between Venezuela and Guyana, is null and void. The Geneva Agreement of February 17, 1966 saw Guyana and Venezuela referring to the United Nations Secretary-General for a decision to settle the matter.

In January of this year, the UN Secretary-General, António Guterres announced he had referred the matter to the International Court of Justice (ICJ)` for juridical settlement.