A meeting was held today between the Mayor and City Council (M&CC) and the Guyana Police Force to forge collaboration in an attempt to better secure the city. The meeting was held at the Chambers of the M&CC with Assistant Commissioner of Police Clifton Hicken, Commander of ‘A’ Division Marlon Chapman, Mayor of Georgetown Patricia Chase-Green, Town Clerk Royston King, Chief Constable Andrew Foo and members of the council. 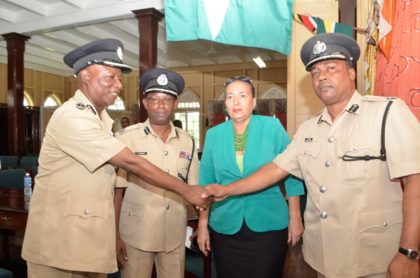 The Town Clerk said that the M&CC is seeking collaboration with the Guyana Police Force in light of the recent prison outbreak.  King said that while the M&CC was aware of the incident they were not formally notified of the chain of events.

King said that while there are discussions between the city constabulary and the Guyana Police Force, information sharing needs to be more formal. This is important he noted because councilors were elected and have a responsibility to secure the communities which elected them.

Assistant Commissioner of Police, Clifton Hicken said that the initiative is one which he welcomes since it will help to lower the crime situation in the city. Hicken’s also noted that a Memorandum of Understanding (MoU) will have to be crafted for the collaboration to be effective.

However, he pointed out that while the MoU is being crafted there are some immediate actions that will be undertaken. 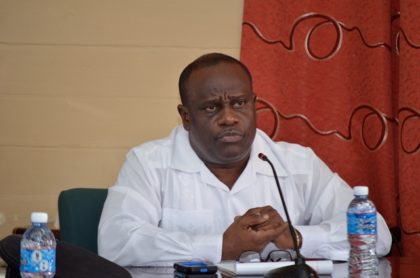 “By the time we are developing the MoU we can do some standing operating procedures (SOPs) which can start almost immediately,” Assistant Commissioner Hicken stated.

He further added that “the MoU gives both sides of the organisation their roles, responsibilities, the if, what and how. In terms of the standing operating procedures, that can work now and we have this collaboration conducted through the Commander of ‘A’ division”. The way in which information is shared is expected to be ironed out in the MoU.

Assistant Commissioner Hicken’ also noted that the collaboration will help to maximise the use of limited resources as it relates to the deploying of officers in and around the city. According to the Assistant Commissioner, “No organization should be working in isolation because it takes all the resources in one organisation. If we work in a collaborative effort it gives us more resources generally, not just the human but vehicle and every other aspect of it”.

The immediate action taken by Assistant Commissioner Hicken was hailed by Mayor Chase-Green, Commander of ‘A’ Division Marlon Chapman, Chief Constable Andrew Foo and other members of the council.