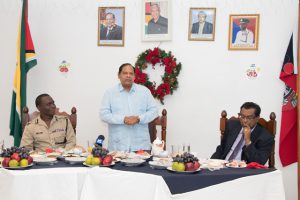 “…two days ago we observed International Human Rights Day and when you look at the reports coming out focusing on Guyana; the country has been removed from categories where you have extra-judicial killings, where you have death squads, where there are summary executions involving whatever you may want to call it … black clothes, blue clothes… or politicians clothed in Phantom Squad uniforms, … Guyana has been removed from that. Sometimes we beat ourselves up so much that we do not recognise that we are better than we have ever been before,” Prime Minister Moses Nagamootoo said.

The Prime Minister said the GPF has lowered the crime rate from the obscene levels experienced under the former administration.

“You have reduced crimes from 1,403 or thereabouts in 2014 to a three-digit number. 965 was the last figure I have seen. You did a good job because as policemen your job was always to avoid reaching four numerals … You removed the levels of obscenity.”

In addition, Prime Minister Nagamootoo also commended the Force for increasing the number of lawbreakers prosecuted compared to the immediate past.

“I give kudos to the leadership of the police force for having worked diligently to produce this result. I can tell you that over the last two years you have had more prosecutions than any time before,” he said.

The Prime Minister noted that notwithstanding the increased number of prosecutions by the GPF under the current government there has not been any credible accusation of prosecutable torture levelled at the Force. In 2009 Minister of Public Security Khemraj Ramjattan, then a lawyer took the Guyana Police Force to court for the lighting afire of the private parts of a 15-year-old boy in police custody.