The Minister of Finance highlighted that Guyana is in the process of designing a dedicated fiscal framework with prioritised clear objectives to be put in place before Guyana starts oil production in 2020. 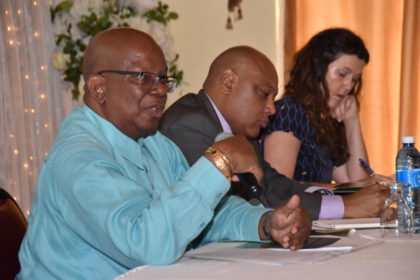 Oil revenues provide a “golden opportunity” to reverse “centuries of mis-development” the Minister noted. Guyana has been continuously warned that if it does not properly manage its oil revenues, it could retard economic development. This is commonly known as the resource curse.

Oil revenues will be used to invest heavily in core traditional sectors to reduce full dependence on oil to sustain the economy, the Minister said. Minister Jordan explained that Guyana will also rely on a sovereign wealth fund (SWF) to guard against the resource curse. “We will ensure that the elements of this fund are compatible with the developmental objectives of the government,” Minister Jordan said.

Guyana’s draft SWF was created with input from the Commonwealth Secretariat, and has since had input from other 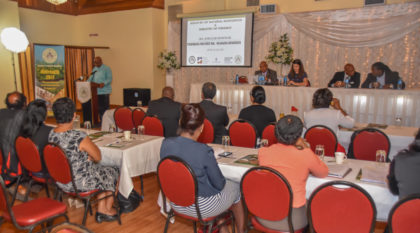 Some of the participants at the oil and gas seminar.

international agencies including the World Bank. The government is looking to have the SWF in place before Guyana’s first oil.

Meanwhile, the Minister emphasised that there has to also be management of domestic expectations in tandem with the resources. “People are already calling (asking) when we are going to start distributing money so it is extremely important that we are able to manage domestic expectations,” Minister Jordan said.

The Ministries of Natural Resources and Finance along with country representatives from Trinidad and Tobago are participants in the two-day seminar which will examine mechanisms for saving petroleum revenues.