Guyana was among four countries that recorded the fastest-growing regional economies of 2018.

This is according to Caribbean Development Bank (CDB), President, Dr. Warren Smith at the bank’s Annual News Conference, held in Barbados. He said that Antigua and Barbuda, Grenada also recorded growth.

In a CDB press release, Dr. Smith outlined that the majority of the Bank’s Borrowing Members recorded economic growth averaging 1.9 per cent compared with 0.5 per cent in 2017. Growth in Guyana recorded at 3.4 per cent mainly due to increased construction activity, in advance of the first commercial production of oil in 2020. 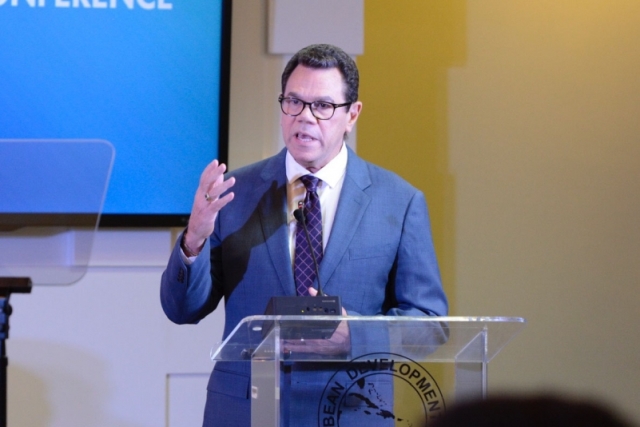 Dr. Smith added that Grenada’s performance of 5.2 per cent sustained a five-year positive trend as that country continues to benefit from the financial growth coming out of its local economic reform programme. Reconstruction saw a 3.5 per cent growth in Antigua and Barbuda, as the island rebuilt and recovered after being hit by Hurricane Irma in 2017.

Conversely, Dr. Smith noted that the destructive 2017 hurricane season hindered economic growth in Anguilla by 40 per cent as visitor arrivals declined sharply; and by 50 per cent in the British Virgin Islands. This was due to the widespread damage to hotel stock. A fall in construction activity, as well as, the impact of the fiscal consolidation led to an economic contraction in Barbados, despite a modest increase in tourist arrivals.

In the face of these mixed fortunes, the CDB President called for a dual strategy of resilience-building and transformation to accelerate growth in the region and to ensure that economic gains can be sustainable.

However, according to Dr. Smith, despite dealing with climate-change challenges, wide fiscal deficits and high public debt; as well as high unemployment, the CDB has projected that the region’s economy is expected to grow by two per cent in 2019.

“Despite projections of deceleration in global economic activity, the 2019 economic outlook for our Borrowing Member Countries is positive. CDB is projecting that real GDP growth will be around 2%, as construction, tourism, and the extractive industries such as gold and oil are expected to expand,” Dr. Smith said.

He highlighted the bank’s ongoing work and partnerships to build climate resilience. These include an agreement with the United Kingdom’s Department for International Development which added GBP30 mn to the United Kingdom Caribbean Infrastructure Fund for reconstruction in Barbuda and Dominica.

CDB will also manage the Dominica Disaster Recover and Resilience Fund established and subsidised by Canada, which will enhance post-disaster response, build more climate resilient schools and empower communities across the country. The bank also signed an agreement with the Green Climate Fund which will facilitate more climate finance projects in the region.

The CDB Head called for changes to resolve the increasingly complex challenges Caribbean countries face and noted that the process has already been taking shape.

“As our institution approaches its 50th year, digital transformation and innovation have moved to the top of our agenda. This means leveraging technology to deliver higher-quality service and greater value to our members and partners. It is important that CDB remains the development partner that Caribbean Governments turn to first for solutions – whether they be funding, advice or technical assistance,” Dr Smith said.