(GEORGETOWN- October 09, 2017)-  Guyana will in two weeks be the host of the Caribbean Association of Medical Technologist (CASMET) for Laboratory Professionals Affiliate of American Medical Technologist (AMT) Biennial General Meeting and Scientific Symposium under the theme “Championing Quality Health Care behind the Scenes in the 21st Century”.

The October 23-27 Meeting and Symposium will provide an avenue to address ways in which they can further improve the Caribbean’s  accessibility and training; improvements in diagnostic and therapeutic laboratory testing techniques; regional professional collaboration and other regulatory issues. 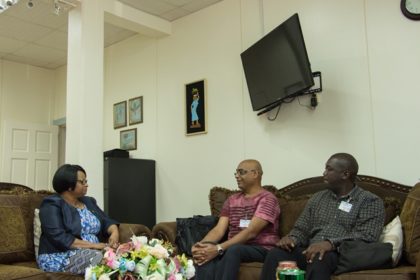 The Meeting which is slated for the Guyana Marriot in Kingston. Georgetown will provide an opportunity for medical laboratory professionals including medical technologists, phlebotomists and laboratory assistants to collaborate on issues of concern in their country and bring council members together to develop regional planning on how they can work with the government and other institutions to identify ways in which they can develop medical laboratory science. Medical laboratory professionals will also have the opportunity to engage in Continued Medical Education (CME) sessions over a three days period which can allow them to gain as much as twenty five credits. CME’s, create an avenue for participants to maintain competence and learn about new and developing areas in their discipline. In countries such as Trinidad, Bahamas and Jamaica, credits are a requirement for renewal of yearly licence for medical technologist to practice at health institutions.

Minister of Public Health, Volda Lawrence during a courtesy call paid to her office by President of the Caribbean Association of Medical Technologists, Harry Narine, and Chairman of the Guyana Branch, Nolan Hawke said she is stunned by the Association’s decision to host the meeting and symposium in Guyana this year.

“I think the conference is coming up at an opportune time, we are happy to be hosting it in Guyana and so I wish you every success”, the Minister noted.

Lawrence in emphasising her support to both CASMET and local medical laboratory professionals said that the Public Health Ministry is currently at crossroads where mechanisms that are used internally for procurement, human resource appointment and upgrading of staffs by training are being reviewed.

“This year we are going to be looking at a lot of legislation, making new changes, amendments so I will be very happy to hear from you and your team at the local branch here on what are some of the things you need to be addressed”, she said.

Meanwhile, Narine explained that over the years, medical technologist throughout the Caribbean has struggled in getting Health Sector Authorities to fully understand and recognise their vital role to towards health care. Therefore, the Association has created a platform which has allowed medical professionals in this discipline to promote the development of professionalism among Clinical Laboratory Professionals within the Caribbean and function as a collaborative and advisory body to respective governments and teaching institutions.

“One of the things we have noted in the Caribbean is that medical technologist are always on the back burner, I don’t think they realise how important we are. Yes, they know the doctors, the nurses are important, but we need recognition, and not much is being given to us as medical technologist”. Narine emphasised.

Though Narine is anticipating a successful Symposium that is likely to attract some 150 Medical Technologist and Exhibitors from the Caribbean and as far as China, he expressed concerned over some Caribbean counterparts not being able to participate since are still being faced with the aftermath of the tropical storms and hurricanes which hit and destroyed several Caribbean island in August-September this year.

“That is the challenge we are having, with the impact of the storm and the hurricanes, we might be missing a few members. Even the suppliers are calling and asking if we are going to have a full turn out at the meeting”, Narine noted.

The Caribbean Association of Medical Technologists (CASMET) is an independent, non-governmental organization representing more than 1500 medical laboratory professionals. There are presently seven functioning branches in the following countries: The Bahamas, Jamaica, St. Lucia, Suriname, Guyana, Barbados and Trinidad and Tobago.