Guyanese boxers happy to be back home

Colin Lewis, Desmond Amsterdam, Dennis Thomas and Keevin Allicock, four of Guyana’s national boxers are now back home after being stranded for months in Cuba due to the COVID-19 pandemic.

The four men who are Olympic Boxing hopefuls were sent to Cuba in January 2020 to undergo training for the qualifiers which were scheduled to take place in Argentina in April. 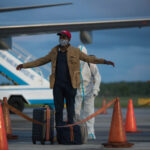 A passenger being sanitised on arrival at CJIA 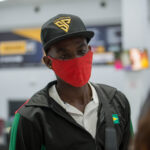 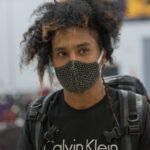 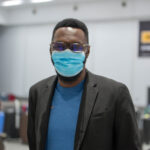 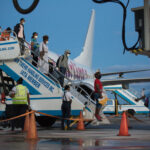 The boxers were scheduled to return home on March 22 but were unable to do so as Guyana’s National COVID-19 Task Force (NCTF) closed the country’s borders and airspace to control the spread of the coronavirus.

Speaking to the Department of Information (DPI), Director of Sport, Christopher Jones explained when the country implemented lockdown measures, the National Sports Commission took the responsibility of the boxers to ensure that their accommodation and other needs were taken care of.

“This also would not have been possible without the support of Halim Majeed and the Guyana Embassy in Cuba,” he noted. Jones disclosed that they facilitated in transporting the young men to Havana, Cuba from where they were being housed initially.

“Throughout the Caribbean, the Government has been making efforts to repatriate Guyanese from the different states and with some collaborative effort from Caribbean Airlines Limited, we were able to bring home Guyanese from Jamaica, Barbados and Cuba,” Jones stated.

The visibly happy quartet told DPI that while the experience was a trying one, they did their best to maintain a positive outlook and commended the NCTF, the National Sports Commission and the Guyana Olympic Association for their efforts to bring them home.

Desmond Amsterdam said while the experience was “quite challenging” he made the best of it as the pandemic was unprecedented. “Things weren’t perfect but I tried to cope with it and I am happy and relieved to be back home.”

Keevin Allicock echoed similar comments noting it was “tough to be away from family for so long” but I learned a lot from the experience.

The boxers were among 101 persons who returned home after being stranded in Cuba, Jamaica and Barbados due to the ongoing pandemic.