“Guyanese will never be poor again!”

―“There is room for everyone under the Big Benab”

Taking the Durban Park stage to thunderous applause, His Excellency, President David Granger launched the six-party “The A Partnership for National Unit+Alliance for Change (APNU+AFC) General and Regional Elections’ Campaign this evening.

The Head of State described himself as an “unbothered” and as someone who foresaw in terms of decades, not merely days, weeks, months or years.

“We are embarking on a new decade of development…What we have done over the last five years, we will do for the next five years and the next five …I’m thinking ten years ahead because I have a vision for Guyanese. Happy households, happy families, happy country.”

The President posited that Guyana was blessed with much oil and the current trajectory will be continued “if we keep these gifts in the hands of the people. Don’t let the gifts fall into the hands of the fakes and the frauds,” he cautioned.

The more than 18,000 assembled roared their approval when the President referenced his embattled opposing candidate noting the yet unanswered questions about his qualifications.

A section of the crowd at the APNU+AFC campaign launch

Emphasising that his government has a plan to develop and advance Guyana and protect its environment President Granger assured that Guyanese were in “good hands” with the Coalition Government which was repairing all that was broken, “That is why we need five more years to develop this country.”

Referencing the recently declared “National Petroleum Day” on December 20, the Head of State proclaimed, “Guyanese will never be poor again! That oil wealth belongs to you and this government will ensure that you benefit from that oil wealth…. We are going to ensure that oil wealth goes to the people who need it most. People like you. People from Regions One to Ten, ordinary people.”

The President recalled that the difficult period Guyanese went through and vowed never to let such bleak times return to the country “Your country is in good hands with APNU+AFC. Trust me. Trust the Coalition,” He vowed

His Excellency President David Granger, his wife Mrs. Sandra Granger and along with Prime Minister Hon. Moses Nagmootoo (fifth from left) and other government ministers on stage

Reiterating his stance of APNU/AFC being a Constitutional Government, the President reminded of the developments wrought in salaries, allowances, pensions, housing, education, infrastructure, public services,

“Give us a chance to make this country develop, to benefit all of you, and you’ll see the transformation. What you saw over the last five years, you ain’t seen nothing yet!”

The President further iterated that Guyanese had 60 days to convince their families and friends to vote for the Coalition adding, “let us make every day count.”

Extending an “olive branch” to potential supporters, the Head of State said “Come in the Big Benab, let us work for the common good. There is room for everybody in the Big Benab. No more winner takes all. All of us will share in the governance in this country!” 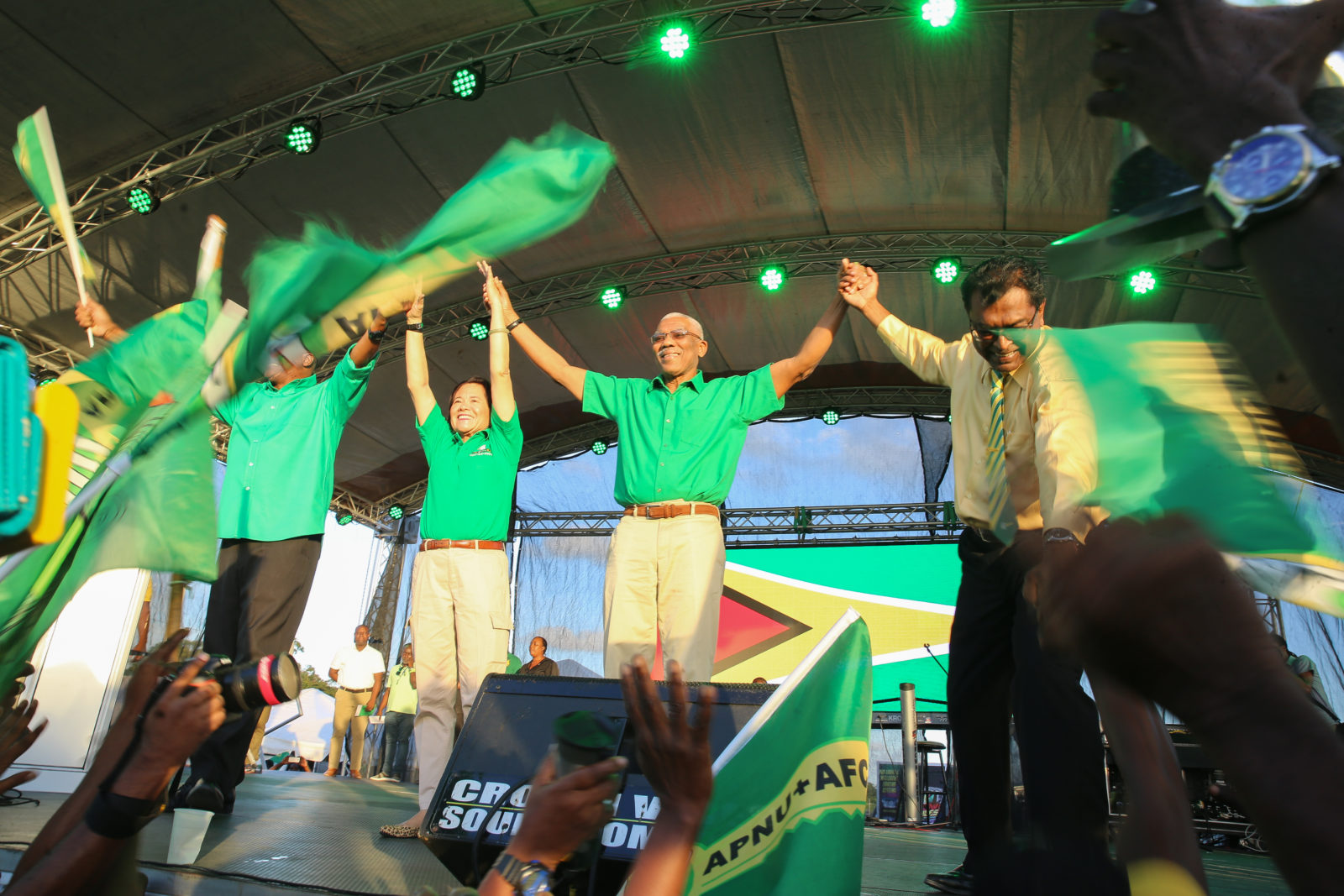