‘Guyanese youths will move from glory to glory’ – Min. Sarabo-Halley

Young Guyanese will benefit extensively from the first world status the nation will achieve when the Coalition Government returns to office on March 2, said Minister of Public Service, Tabitha Sarabo-Halley.

Addressing a sizeable crowd at James Street in the Charlestown/Albouystown constituency Thursday evening, the Public Service Minister rubbished negative talk being peddled that the government does not have plans for the country’s youths. 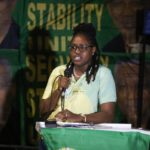 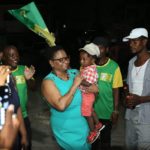 Volda Lawrence, Minister of Public Health interacting with a kindergartener.

She said while the government continues to invest in all sectors of the country, it has injected billions of dollars for the youths to attain their full potential.

“We are on the brink of an economic boom; we have accomplished much in just four-plus years and there is still much more to achieve. The resources are becoming available for us to accomplish what we know is necessary for Albouystown, Georgetown, all the regions and the entire country,” Minister Sarabo-Halley stated.

She noted that with the additional resources garnered from the oil and gas industry, “education, infrastructure, health and much more will receive a significant boost.”

She was joined by her colleague the Minister of Public Health, Volda Lawrence who adding “the Coalition administration is a sound one which has a great vision for all Guyanese.”

Minister Lawrence remained adamant that the inequities of the former government will not reoccur.

In his remarks, Georgetown Mayor, His Worship Pandit Ubraj Narine chronicled the major developments in the capital city noting that the Coalition government must be credited for this since it has reintroduced local democracy after taking office in 2015.