The Guyana Sugar Corporation (GuySuCo) is making moves to reduce its dependency on government’s subvention as it begins reorganising for downsized operations.

“Profitability at the end of 2020 may not be. What we are looking to do is to become cash positive. By 2020 we are hoping to stop our dependence on the government for these subventions we’ve been asking for,” Finance Director and Deputy Chief Executive Officer of GuySuCo, Paul Bhim said. 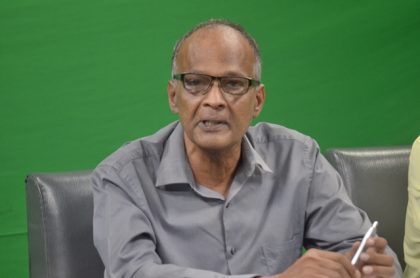 The government has provided financial relief to cash-strapped GuySuCo to the sum of $32B over the last three years and is still expected to provide these subventions over the coming two years.

However, Bhim said GuySuCo will be relying on value-added sugar production to achieve its cash neutrality target, at a press conference hosted today, in the National Communications Network’s (NCN) studio.

“With the three estates that’s remaining, we’re looking to maximise our revenue from the value-added sugar, that is sugar sold to CARICOM, which is mainly bagged sugar and packaged sugar,” Bhim explained.

GuySuCo is also hoping to supply the local market which consumes approximately 20,000 tons of bagged and packaged sugar yearly. “In addition to that, we have a small US quota of about 13,000 tons…so we’re going to be satisfying that quota as well,” Bhim noted.

The corporation is also looking to move into new markets, particularly plantation white sugar which is a substitute for refined white sugar. There is potential at Uitvlugt Estate for increased sugarcane cultivation, Public Relations officer Audreyanna Thomas noted.

The sugar entity is collaborating with Jamaica and Belize, members of the Sugar Association of the Caribbean (SAC), to urge CARICOM governments to grant a Common External Tariff (CET). “Where white sugar coming in extra-regionally, some sort of a tariff will be imposed, we’re not sure as yet what percentage we’re looking at…in order to make our plantation white sugar competitive,” Bhim explained. To be competitive the tariff the sugar corporation is seeking has to be in the range of the charge attached to brown sugar which is in the range of 30-40%.

The corporation is also examining molasses and co-generation to raise its revenues but will have to consult feasibility studies first.  The emphasis on value-added production is not at the neglect of raw sugar production. GuySuCo will still be producing raw sugar but at a reduced amount.

The aim is to produce 150,000 tons of sugar by 2020 with an additional 10,000 tons, pending the expansion of the Blairmont Estate. The potential to expand production at Blairmont depends on improved market prices for sugar. Guyana exports mainly to Europe and currently, the price is valued around US$310 per ton which is less than half the price Guyana enjoyed when it had Europe’s preferential market.

The downsizing of the sugar industry to three estates are among recommendations outlined in a state paper on the future of the sugar industry. The end result will see GuySuCo consisting of three estates and sugar factories. The estates, complete with factories, would be Blairmont in the West Bank Berbice, Albion-Rose Hall in East Berbice and the Uitvlugt-Wales Estate in West Demerara.