The Guyana Water Incorporated made presentations to the National Toshaos Council on the evening of Thursday August 24, 2017. A cheque was also handed over to a representative of the Paramakatoi Village Council, by minister within the Ministry of Communities Dawn Hastings-Williams for the construction of a reservoir. 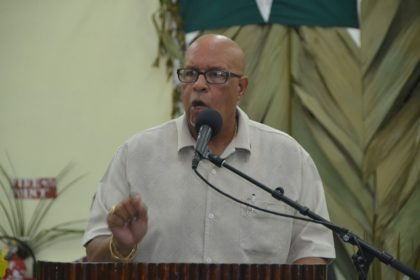 The presentation highlighted some of the developmental works that have been done thus far in the respective hinterland regions and what can be expected for 2018. Presenting on behalf of GWI was Managing Director, Dr. Richard Van West Charles.

Dr. Charles began his presentation by placing emphasis on the mission and vision of GWI. “Our point of departure with respect to service to the hinterland comes from the work and the direction of President Granger of which he speaks to the issue of equity between the hinterland and the coastal areas.”

The head of GWI said that potable water must be accessed by every resident, in every community. He added that this means the water must be free of bacteria, fungi and other viruses which may causes illness and even death.

“We are now about to complete our strategic plan and within the next four years this is our task to ensure that the population has access to potable water which means water of a good quality in accordance with WHO (World Health Organisation) standards.”

According to Dr. Richard Van West Charles, GWI has begun work in Region Nine by chlorinating water from at least six main wells in the region. On the heels of this, Mabaruma has now been targeted as the next hinterland community providing treated water to its residents.

“We have commenced also distributing a series of special filters which removes all the viruses, bacteria and fungi from the water so that you can drink that water immediately. We had some larger filters which have been installed at Kamarang hospital, at Kako Primary School, at Baracara school and at the Mabaruma hospital.” The GWI head explained.

The entity has also embarked on a process of installing miniature laboratories throughout the hinterland. These facilities will be able to test water samples within the region, eliminating the need to transport those samples to Georgetown.

Other hinterland projects which are yet to be implemented include the installation of a series of the larger filters in Region One at Smith’s Creek, Waikrebi Barabina, Wanaina Santa Rosa Secondary and Primary schools and the Matthews Ridge Hospital and school, in Region Seven at Quebenang, Phillipai, Jawalla, Warwetta, Wax Creek, Kamarang Primary and Nursery schools, and Issano, Region Eight Micobie, Monkey Mountain, Itabac, Chenapou and Kanapang.

By way of giving assurance of government’s commitment to hinterland development, Dr. Charles added that a

Some of the Toshaos and other village leaders in attendance on Thursday evening.

cheque for the sum of $4, 236, 380 was prepared and ready to be handed over to the village council of Region Eight.

“In Region Eight, for example, you would have heard about the Paramakatoi project and in collaboration with the council we are now in the phase of the construction of a reservoir which will make water available to Paramakatoi and that water will be treated water.”

The GWI and Village council of Region Eight signed a memorandum of Understanding (MoU) to have the project completed. Villagers of Paramakatoi will play in integral role in the execution and completion of this project, working alongside skilled engineers from GWI to see the project to fruition.