High Court to give ruling tomorrow on its Jurisdiction over GECOM

The High Court will be handing down its ruling on whether or not it has jurisdiction over the Guyana Elections Commission tomorrow at 13:30hrs. The ruling will be handed down by Chief Justice, Roxane George.

This comes on the heels of GECOM being taken to court over the verification of district four results by the People’s Progressive Party after it was declared by Region Four Returning Officer Clairmont Mingo. 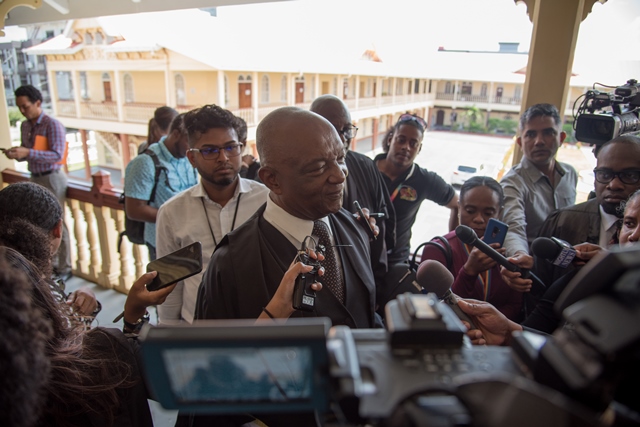 Attorney at Law, Neil Boston addressing members of the media.

SC Boston noted that the argument put forward is that the question raised in the application filed by the applicant falls within Article 163 (b) 1 of Guyana’s Constitution.

That article states that “either generally or in any particular place, an election has been lawfully conducted or the result, therefore, has been or may have been, affected by any unlawful act or omission.”

To support this argument, the Senior Counsel cited the case of N. P Punaswammy vs the Returning Officer in the state of Madras in 1952 and V. Sreekumar vs The Chief Electoral Officer on 24 March 2009 in Kerala, with similar grounds.

Among the local cases referred to was Gladys Petrie and others vs the Attorney General others in 1968 and more recently Christopher Ram vs AG in the infamous Charandass Persaud’s case where Ram was seeking to force the hands of GECOM to begin preparations for elections.

For the applicant – the PPP – Douglas Mendes in his argument contended that the High Court has jurisdiction to hear the case.

SC Boston believes that GECOM will get a favourable ruling. “We have a good case. We probably have it locked up but she has to decide whether it is locked up, this is only my opinion,” he stated.

The Chief Justice will hand down her ruling tomorrow.