Georgetown, Guyana – (February 27, 2018) Minister of State, Mr. Joseph Harmon, yesterday, paid a courtesy call by a delegation from the Frankfurt Zoological Society (FZS) led by the organisation’s South American Programme Director, Dr. Antje Mueller. The visiting team was accompanied to the Ministry of the Presidency by Commissioner of the Protected Areas Commission (PAC), Ms. Denise Fraser. They will hold meetings with the PAC’s technical team, visit the Kanuku Mountains Protected Area, where they have been focusing much of their support and engage with the PAC and other partners on strategies that will allow for the strengthening of partnerships. 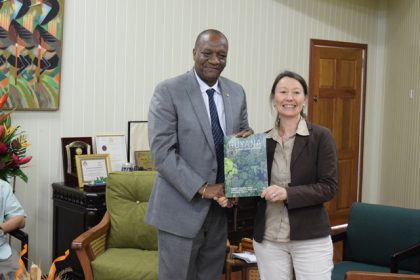 Minister of State, Mr. Joseph Harmon was presented with a book on the Frankfurt Zoological Society’s support for and work in Guyana.

Minister Harmon said that in keeping with President David Granger’s vision of creating more protected areas across the country, efforts are apace to work out the technical issues. He also reminded that the country has set itself on a path to ‘green’ development, which will not only result in conservation, but will also address infrastructure and human resource development, in relation to protected areas.

He also thanked the FZS for the work it has been doing in Guyana and noted that this visit will serve to heighten regional and international focus on the country.

Meanwhile, Dr. Mueller, who is on her second visit to Guyana, spoke of the warmth and hospitality, with which her delegation has been met. She also spoke of the commitment of the FZS to working with the PAC and the Government of Guyana to further its protected areas programme. In 2015, the Government signed a Memorandum of Understanding with the FZS. This agreement saw the organisation providing the Pac with the services of two experts; Dr. Anoushka Kinahan and Thadaigh Baggallay.

The FZS, founded in 1858 in Frankfurt, Germany, is an internationally operating civil society organisation, whose objective is the conservation of globally important biodiversity. In addition to its extensive work in Africa, the organisation has been supporting conservation action on South and Central America since 1968 in collaboration with governmental and non-governmental partner organisations.