– as Coalition elections campaign heats up

The Mahaica-Berbice Region did not disappoint Wednesday evening when, for the second time around, the APNU+AFC Coalition took a resounding message of success to an oversized crowd, as it continued its elections campaign.

The community centre ground of Hopetown, West Coast Berbice (WCB) could hardly contain the multitude, nothing short of the D’Urban Park crowd last Friday, as thousands showed up in support of the Coalition. 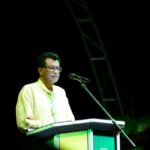 The massive crowd at Hopetown village on Wednesday.

President David Granger and Vice President and Minister of Public Security, Hon. Khemraj Ramjattan both delivered the clear message that the opposition must not return to government. This, they insisted, can only be done if Region 5 residents do what is right on March 2, 2020.

Minister Ramjattan, who is also the Coalition’s prime ministerial candidate, said the electorate must choose a government that will make critical decisions which will benefit all Guyanese.

“It is your duty to ensure that you elect the right persons so that Guyanese can experience the good life we have been providing,” Minister Ramjattan said in his address.

He said teaming up with the A Partnership for National Unity (APNU) to contest the 2015 General and Regional Elections was, by far, the best political decision the Alliance For Change (AFC) has made, apart from establishing the party itself.

“I want to tell you that this Coalition is here to stay a long, long time. I want to make the case that when March 2nd comes around, you will be there to reaffirm your support for this Coalition-government led by David Arthur Granger,” he told the massive crowd.

Minister Ramjattan also told residents that the predominantly agriculture region is the most progressive belt the country has; therefore, the re-elected government will ensure that more agricultural lands are opened for farmers.

“For the next five years, we have to ensure that we make these things happen. We have to have sustained economic growth so that we can get wealthier and wealthier still. We have to create jobs, and all of this can only be done with this government.”

He outlined some of the successes the region has had under this administration. These include a $36Million early childhood centre in Ithaca village, West Bank Berbice, the introduction of world-class healthcare with the hiring of medical technologists in the region, the installation of a $414Million-dollar sluice at D’Edward Village and a brand-new science laboratory at the Mahaicony Secondary school, among other developments.

Representing the youths of Region 5, a vibrant Vinceroy Jordan had the crowd roaring when he declared that young people are 100 per cent behind President Granger, as he represents good governance and leadership.

“We here in Region 5 not only have confidence in our government, but we have full confidence. When they said no confidence, we saying full confidence.” He continued listing the transformation the region has seen under the government over the last few years, particularly in the area of education.

In this regard, he urged the youths not to be narrow-sighted and “forget the days we could not walk the streets.”

“Let us not forget the days when our sons and daughters went missing… we are not going back to such a day. We are remaining with the Coalition government for safer streets, job creation and better production within this nation of ours.”