On Thursday evening, the University of Guyana’s Press launched its first publication which contains a wide scope of Diaspora Engagement studies.

Director of the Office of Strategic Initiatives of the University of Guyana, Dr. Fitzgerald Yaw said the book is an output of the Diaspora Conference which was held in June 2017 with partnership from the University of Liberia, West Africa and the Africa Pacific Group of Countries.

He said the first publication is part of the Renaissance Project for the University of Guyana launched in 2016 by UG’s, Vice-Chancellor, Professor, Ivelaw Griffith.

“The Diaspora engagement projects which are discussed in this book reflects the reality of the global warming in which we live and the people connections, which the diaspora really represents,” Dr. Yaw said. 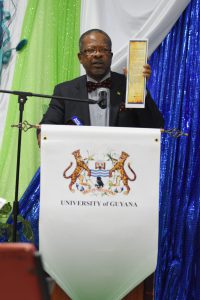 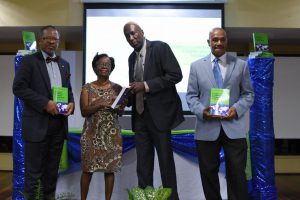 (left -right) Vice-Chancellor of the University of Guyana, Professor Ivelaw Griffith, a representative of the university’s library receiving a copy of the book from Dr. Fitzgerald Yaw and (extreme right) Professor of Sociology University of North Georgia George Danns

On the entrepreneurial aspects, Dr. Yaw added that a conference is expected to be held in June 2019, which will see partnerships with the School of Entrepreneurship and Business Innovation, which is also a part of the Renaissance project at the University. The forum will be hosted under the theme, “Cultural Diversity and Innovation Engaging the Diaspora for Enhanced Caribbean Competitive Landscape.”

“The University of Guyana Press is a part of a large concept to rebuild this University, of giving a fillip to capital investments, to boost our economic viability,” the Vice-Chancellor remarked

2,500 copies of this first publication have been printed, with donations of three copies being made to National Library, University of Guyana’s libraries on the Turkeyen and Tain campuses.