Addressing the Toshaos and leaders of more than 212 villages and communities, His Excellency, President David Granger stated that human development, which is at the core of ensuring a good life, would be meaningless unless peoples’ lives could be improved.

He noted that “it recognises the importance of improving peoples’ lives. For Indigenous advancement, especially in four fields, education, health, livelihood and social protection. Human development aims at ensuring the good life for all. Indigenous people inhabit all ten regions of Guyana, mainly in the hinterland. Human development in Guyana must mean hinterland advancement.” 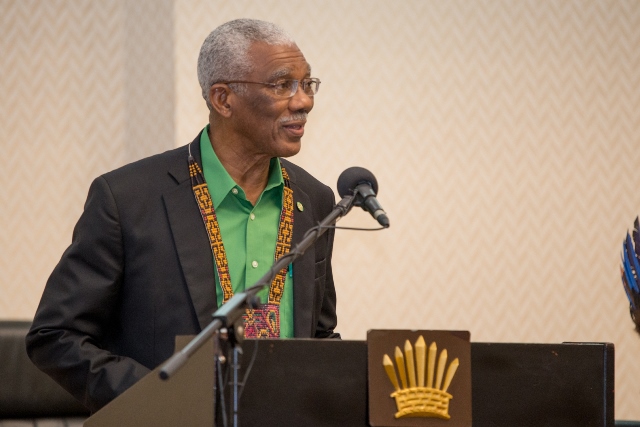 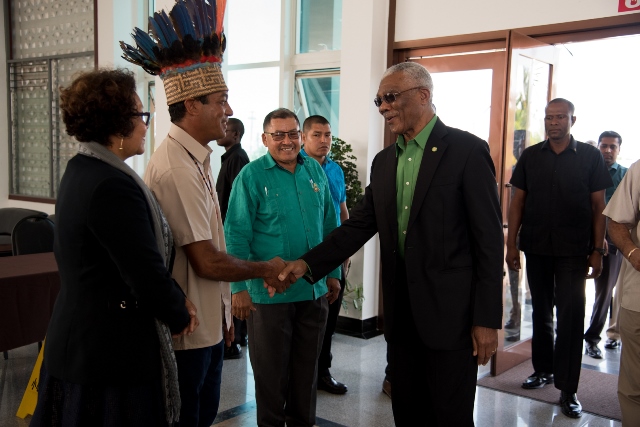 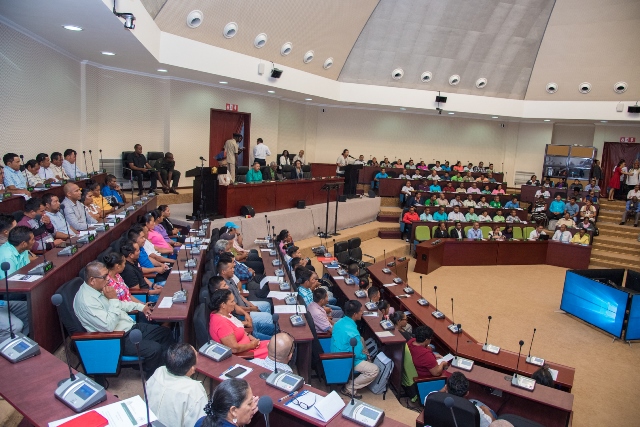 The Toshaos, who are meeting at the Arthur Chung Conference Centre (ACCC) for the 13th Annual National Toshaos’ Council (NTC) conference, were urged to put aside their differences and work together to reduce some of the social ills affecting their communities.

“…Anti-social behaviours undermine the cultural fabric of communities, as well as everyone’s quality of life,” the president said.

He referenced the United Nations Human Development Report 1990 which stated “people are the real wealth of a nation. The basic objective of development is to create an enabling environment for people to enjoy long, healthy and creative lives.”  Adding that the report emphasises education, health and decent standards of living are central to a good life.

“I add a fourth element, that is ‘social protection’. Guyana is moving towards becoming a more inclusive society. This means that hinterland human development is imperative, especially in those fields.”

The Head of State explained that hinterland human development has improved appreciably, particularly over the last years.

He also reminded of the ‘Decade of Development’ and its connection with the UN’s Sustainable Development Goals and what it means for all citizens.

The president further explained that the ‘Decade of Development’ aims to eliminate hunger; ensure food security, safe water and hygiene; enable everyone to access universal primary and secondary education, and expand technical and vocational training opportunities for indigenous peoples.

“I have identified five targets which are achievable and which would improve substantively the quality of life of Indigenous Peoples by 2029. I believe that these are realistic goals which can be achieved within the next ‘Decade.’ I urge this National Toshaos’ Council Conference 2019 to endorse these five fields of action for inclusion in the objectives of the ‘Decade of Development 2020-2029.”

The National Toshaos’ Council’s Conferences were described, by President Granger, as annual opportunities to expedite plans for social and economic improvement. He said they present an opportunity for the Indigenous leaders to review the progress they made in developing their villages, renew their commitment to improving the livelihoods of their people and to remodel their village improvement plans (VIPs) for future years.

In closing, he reiterated:

“People are the real wealth of a nation. The basic objective of development is to create an enabling environment for people to enjoy long, healthy and creative lives. I am confident that we will make a real and lasting positive impact in ensuring that the essentials of human development – education, health, decent standards of living and social protection – are realised within the next ten years.”

The conference is an important forum that allows village leaders to have engagements with the president and ministers, and officials from various government agencies. The event is aimed at consolidating and expanding the national development and transformation processes to cater to the needs of Indigenous people. It will also address issues such as land titles and demarcations, education, health, security and infrastructure. It is coordinated and hosted by the NTC with support from the government through the Indigenous Peoples’ Affairs Ministry.