“I speak softly, but I carry a big stick” ─ Pres. Granger talks about his leadership

─ H.E has also been very flexible, creating the type of government that responds to present-day challenges

His Excellency, President David Granger said his leadership of the Coalition government has been the hallmark of the transformation of the country.

Though hardly seen, the president said that underneath his quiet persona is a “hard taskmaster”, when it comes to authentic leadership and providing the best to every citizen of Guyana.

President Granger was being interviewed on the Gordon Moseley’s ‘INSIDE Sources’ podcast on Sunday.

“I do not believe that my critics would find such agreement among my ministers. I am a very strong leader. I am not laid back at all. I insist on high standards and performance and am behind my ministers and officials to ensure that they deliver the best quality of service,” the president said.

The Head of State related that he ensures that everything done by his government, is done to the satisfaction of the Guyanese people.

“I work quietly. There is a saying in West Africa that says “speak softly and carry a big stick”, I speak softly, but I carry a big stick. I ensure that my policies are implemented,” he emphasised; a policy that has seen his administration moving from strength to strength over the last four years. 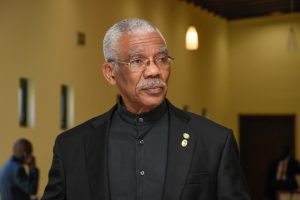 The leader said each of his ministers understands that if they fail to perform effectively, “they will hear from me”.

Explaining the praxis of Guyana’s political system, President Granger said the makeup is based on party politics. He explained that persons are elected to the National Assembly based on a list. That system allows for lack of flexibility since ministers are chosen from the list. He said he has seen some difficult circumstances and has made necessary changes.

He noted that while there have been changes in portfolios since the Coalition assumed office in 2015, this has resulted in a higher level of efficiency among ministers.

He cited the example of Minister of Public Telecommunications, Hon. Catherine Hughes, who had served as Minister of Tourism, but was later asked to serve in her current capacity. This was due to the overwhelming success of the public telecommunications sector around the world. The president further stated that Minister Hughes has since been serving with distinction.

Underscoring his successful leadership, the Head of State said he had the foresight to create a number of departments within several ministries that directly addresses several areas of national development.  In the future, the Ministry of Education will see the establishment of a Science and Technology Department that will deal with the Science Technology Engineering and Mathematics (STEM) disciplines. Currently, within the Ministry of the Presidency, there are the Departments of Citizenship, Energy, Environment, Defense, and Social Cohesion; agencies that were nonexistent under the previous administration.

Apart from being strict, President Granger said he has also been very flexible, creating the type of government that responds to present-day challenges. Should other changes be necessary following the March 2020 elections, the president expressed his readiness to make the call.