The International Court of Justice, today, ruled that it has jurisdiction to hear the case brought by Guyana concerning the validity of the 1899 Arbitral Award against Venezuela’s claims that the Award was null and void.

ICJ President Justice Abdulqawi Ahmed Yusuf, delivered the judgment during the hybrid hearing at the Peace Palace in The Hague.

Venezuela did not take part in the proceedings.

However, the Court found that it does not have jurisdiction to hear Guyana’s claims, arising from events that occurred after the signature of the 1966 Geneva Agreement.

That judgement has now opened the door for the Spanish-speaking nation to join the substantive matter.

In January 2018, United Nations Secretary-General Mr. António Guterres, acting within the authority bestowed upon him by the Geneva Agreement, chose adjudication by the Court as the final means for resolving the controversy.

This followed the Good Offices process which Guyana utilised in 2014 and which had been exhausted without reaching a resolution.

Guyana, on March 29, 2018, filed its application instituting proceedings against Venezuela over its disagreement on “the legal validity and binding effect of the October 3, 1899 Award.”

Venezuela sent the Court a Memorandum and issued a public Communique in support of its argument that the Court had no jurisdiction.

In its application, Guyana based the jurisdiction of the Court on Article 36 of the Statute of the Court – the “Agreement to Resolve the Controversy between Venezuela and the United Kingdom of Great Britain and Northern Ireland over the Frontier between Venezuela and British Guiana”. The Agreement states that Guyana and Venezuela “mutually conferred upon the Secretary-General of the United Nations, the authority to choose the means of settlement of the controversy and, on January 30, 2018, the Secretary-General exercised his authority by choosing judicial settlement by the Court.”

In its judgement, the Court relied on the 1966 Geneva Agreement pointing out that the parties accepted the possibility of the controversy being resolved by means of judicial settlement.

“The Court therefore, concludes that Guyana’s claims concerning the validity of the 1899 Award about the frontier between British Guiana and Venezuela and the related question of the definitive settlement of the land boundary dispute between Guyana and Venezuela, fall within the subject-matter of the controversy that the Parties agreed to settle through the mechanism set out in Articles I to IV of the Geneva Agreement, in particular Article IV, paragraph 2, thereof, and that, as a consequence, the Court has jurisdiction ratione materiae to entertain these claims,” President Yusuf read.

The Court believes that by concluding the Geneva Agreement both Parties accepted the possibility that under Article IV, paragraph 2, of that instrument, the Secretary-General could choose judicial settlement by the International Court of Justice as one of the means listed in Article 33 of the Charter of the United Nations for the resolution of the controversy. It said the January 30, 2018 decision of the Secretary-General was therefore taken in conformity with the terms of Article IV, paragraph 2, of the Geneva Agreement. 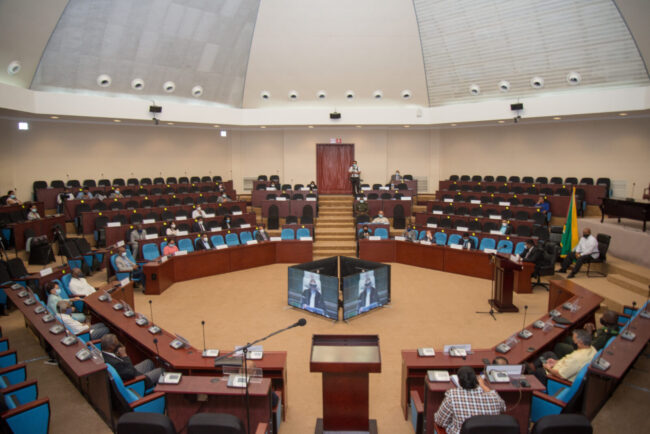 Ministers of Government, heads of the Disciplined Forces and senior Foreign Affairs officials, at the Arthur Chung Conference Centre, listen to the judgment of the ICJ at the ACCC 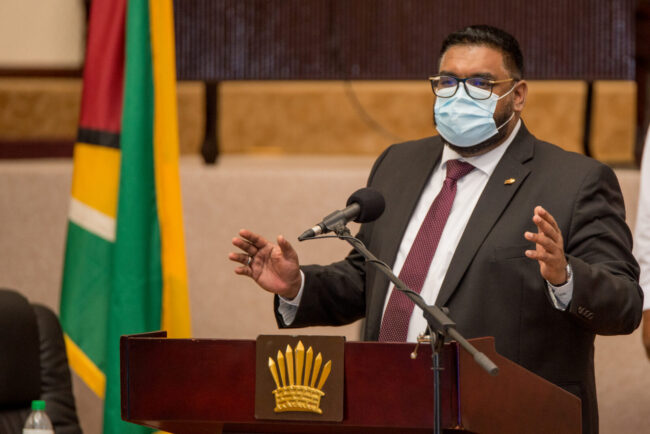 His Excellency Dr. Mohamed Irfaan Ali at the ACCC today