The public hearing on the question of the jurisdiction of the International Court of Justice (ICJ) in the case concerning the Arbitral Award of 1899 (Guyana vs Venezuela) was held today at the Peace Palace in The Hague, the seat of the Court.

Guyana’s co-agent Sir Shridath Ramphal in his presentation contended that the International Court of Justice unquestionably has jurisdiction to hear the case and adjudicate Guyana’s claims that the validity of the boundary between the two countries has been permanently fixed since 1899. 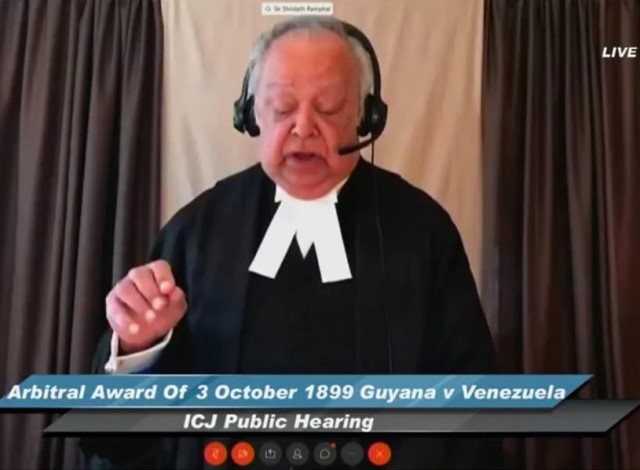 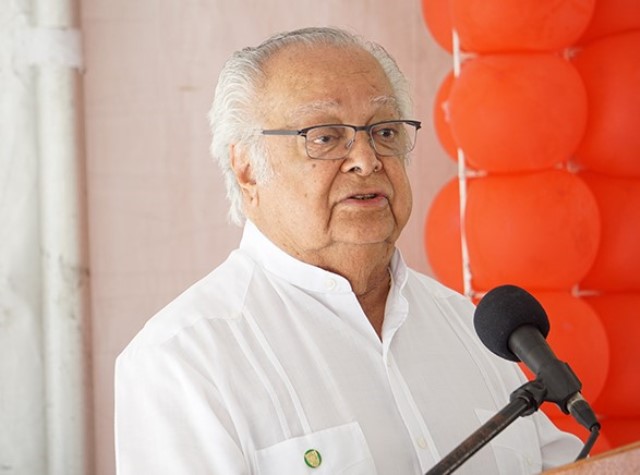 Sir Shridath Ramphal, who is part of the high-level legal team presenting Guyana’s cases before the ICJ. The court is deciding whether it has jurisdiction to hear and determine the case brought before it to put an end to the border controversy.

It was noted that Venezuela failed to file its counter-memorial by 18 April 2019, the date fixed by the court.

Instead, on November 28, 2019, it submitted a 56-page memorandum to the court accompanied by a 155-page annex setting out the basis for its objections to the court’s jurisdiction to hear the case.  Venezuela did not participate in today’s hearing.

In response to those written documents, Sir Shridath Ramphal said Venezuela’s objections are without foundation noting that it was regrettable that it chose not to take part in the proceedings.

“Undoubtedly, it would have been more helpful to the Court for both parties to appear to fully present their arguments in the first round and respond to each other in second. But at least the Court has not been left to speculate as to what Venezuela might have said had it appeared in this Great Hall of Justice”, Sir Shridath Ramphal told the Judges via virtual conference.

Guyana’s contention that the ICJ has jurisdiction over the matter, he said, is derived from firstly, the agreement to resolve the controversy over the frontier between Venezuela and British Guiana signed at Geneva on 17th February 1966.

Secondly, the decision of the Secretary-General of the UN – pursuant to Article 4(2) of that agreement – that the controversy shall be resolved by the International Court of Justice.

Sir Shridath Ramphal reminded that for close to 60 years Venezuela has tried and failed to ruin the sanctity of the Treaty of Washington and to nullify the Paris Award.

He noted, “The Secretary-General of the United Nations indicated to the Presidents of Guyana and Venezuela in these words and I quote ‘I have fulfilled the responsibility that has fallen on me within the framework set by my predecessor and significant progress not having been made toward arriving at a full agreement for dissolution of the controversy, I have chosen the International Court of Justice as the means that is now to be used for its solution.”

Observing that 120 years have passed since “international law spoke in Paris at the end of the 19th century” Sir Shridath Ramphal said contrary to international law and the binding award of 1899, Venezuela, has cultivated a nationalist passion to disavow that day in Paris and lay claim to almost three-quarters to Guyana.

According to Guyana’s co-agent, this was not always so since the arbitral proceedings in Paris were initiated at the behest of Venezuela who continues to enjoy the gains brought to them by the award.

“Yet, the process that brought us here is rooted by the country’s repudiation of that award. Repudiation more than six decades after it was handed down at a time that seems propitious to it, the very eve of Guyana’s independence in the 1960s.” Sir Shridath Ramphal noted while providing a background on the issue.

Paris 1899, he said was the fulfilment of Venezuela’s early and understandable wish that the border between themselves and British Guiana not be left to the negotiation by the imperial powers, but should be determined by international arbitration.