Beneficiaries of the Rural Hinterland Housing Programme in Region Nine continue to reside comfortably in their homes that were constructed in 2013. This was revealed following a visit by representatives of the donor agency the Inter-American Development Bank (IDB) and the Ministry of Communities last Friday. 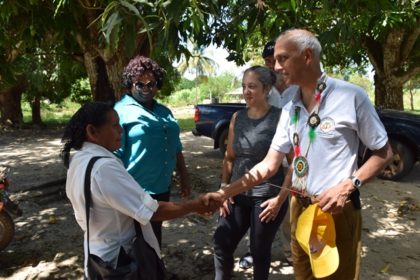 Minister of Communities Ronald Bulkan and Executive Vice President of the Inter-American Development Bank, Julie Katzman greeting one of the beneficiaries of the Rural Hinterland Housing Programme.

The programme, which began as a pilot in Regions One and Nine, catered for the construction of houses and the replacement of roofs. It focused on improving livability by addressing sustainable housing and, by putting in place the proper infrastructure such as water and sanitation.

The Department of Public Information (DPI) was on the ground and spoke to some of the beneficiaries. Vera Browne, a mother four and one of the recipients, said she fortunate to be among those that received homes.

“I must say thank you to IDB and the government and the people who work on the house like the engineer who was up to date… it was very tough for me as a single parent mother but thank god that I get this building”, Browne stated.

Another beneficiary of the programme, Clarenda Williams, also expressed gratitude to the government and the IDB for providing her with a home of her own. Williams is a mother of six and a widow as her husband passed away over eight months ago. She received her home in 2013 and has since modified it. 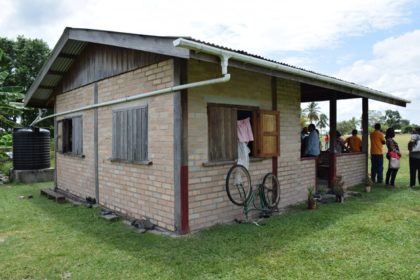 One of the houses constructed under the Rural Hinterland Housing Programme.

IDB Executive Vice President, Julie Katzman, following her visit and interaction with the residents said that it was clear that the programme has significantly improved the lives of those persons. Katzman pointed out that it is the work of the IDB to develop the lives of people while maintaining the communal culture of the people.

The Executive VP stated that “We spent some time with the community, people from one of the schools and with others who have benefitted from the programme and you can see in fact how much it really has improved people’s lives.”

Minister of Communities Ronald Bulkan expressed his satisfaction with what he had seen during his visit. “The standard of construction, the design that there was some modification to allow for a little bit more improved ventilation and air circulation to make these buildings cooler and understandably, beneficiaries are ecstatic”, the Minister explained.

The pilot programme concluded in 2015 and due to its success, the government decided to have it continue until 2019 at a cost of US$3.1M, funded from the IDB.   The Sum of $193M was allocated for the construction of the 17 houses and 15 roof replacements. To date, a total of six houses have been completed and fifteen roofs replaced in Region Nine under the second phase of the programme. When the project concludes, it is expected to benefit a total of 611 families in Regions One and Nine. 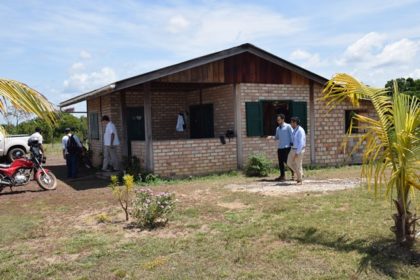 Another home constructed under the Rural Hinterland Housing Programme.