India to celebrate with Guyana at Republic Golden Jubilee

The expression of India’s culture will be one of the highlights of the celebration of Guyana’s Republic Golden Jubilee anniversary next year.

This was confirmed today as the Indian High Commissioner to Guyana, His Excellency, Dr. K.J. paid a courtesy call on Minister of Social Cohesion, Hon. Dr. George Norton. 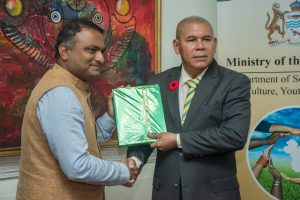 Guyana has very big plans for the celebration. Included in these arrangements, is the inclusion of several countries that have historical and cultural ties here. One such country is the Republic of India.

During the courtesy call this morning, Minister Norton said the meeting came at a time when Guyana is in its preparatory stage for the grand event.

“Here it is, we have been visited by the Indian High Commissioner, and he has agreed to provide a troupe from India to come here and perform as part of the celebration, along with getting involved in a short course, symposium workshop kind of in Information Technology.”

Both Guyana and India were once part of the British Empire. Relations between the two countries have been cordial since Guyana’s independence in 1966.

The Indian High Commissioner to Guyana relayed that his country, which is rich in culture, stands ready to collaborate with Guyana. The country has several graduate scholarships available for Guyanese students- two of which are exclusively for art and culture.

“I am so proud to be in Guyana because you are a diverse, multiethnic country. So is the case in India. We have various tribes, various religions which have thrived throughout current affairs. We can share good experiences, practices… social harmony.”

Guyana and India share close historical and ancestral bonds which continue to deepen through cultural exchanges.

The common love for sport, particularly cricket and hockey, has also inspired healthy competition and exchanges.