The stalled rehabilitation of the Grahams Street in Plaisance will soon recommence. This follows a commitment by Minister within the Ministry of Public Infrastructure, Annette Ferguson to ensure the roadworks are resumed. 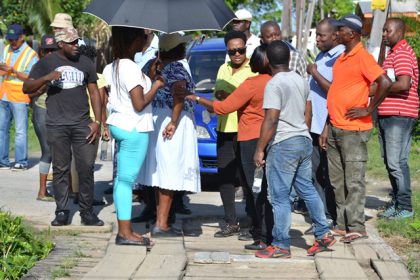 Minister within the Ministry of Public Infrastructure, Annette Ferguson engaging residents of Sparendaam .

The repairs to the street began under the then Public Works Ministry.

“The Ministry will work along with the regional administration, to have our technical teams conduct a feasibility study and assessment and then proceed to have the necessary measures taken,” Minister Ferguson said. She was at the time conducting an infrastructural assessment visit to the communities of Plaisance, Goedverwagting and Spareendaam in Region Four.

The Minister noted that some of the problems raised would have accumulated over a period of time.

Minister Ferguson explained that her Ministry has already budgeted for programmes in 2018 for which it must attend. She however assured that the savings accrued will be utilised to realise the commitments made during the visit.

“We have to ensure that the critical programmes we catered for in 2018 are well executed, whatever savings we have we will try to address some of the most critical areas in these communities.”

The visit is a precursor for others to come to assess and address any infrastructure developments in several communities on the East Coast of Demerara. 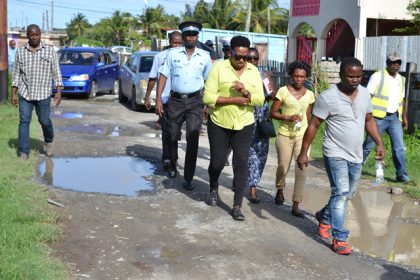 Minister within the Ministry of Public Infrastructure, Annette Ferguson conducting a walkabout in Goedverwagting. 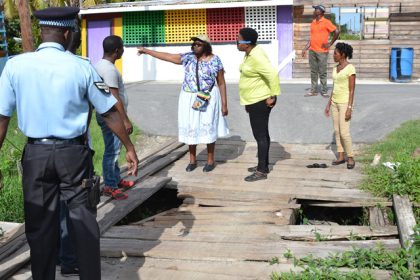 Minister within the Ministry of Public Infrastructure, Annette Ferguson and Chairman of the Demerara/Mahaica Regional Administration assessing a bridge in Plaisance. 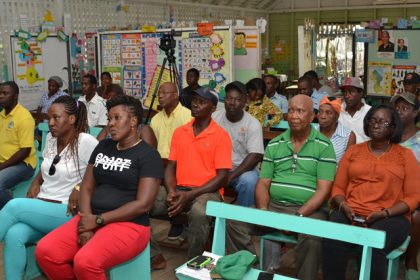 The audience at the community meeting.