Inspiration can come from all around -from koker to combine

“Megathurium” or the Grey Beast is the name of the Robot which helped the STEM Guyana team dominate their first ever international robotics competition. The team placed 10th overall after competing against 164 other countries at the inaugural First Global robotics competition held in Washington, D.C. 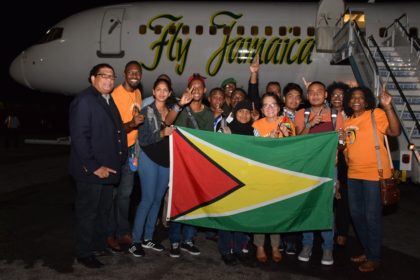 To build the “Grey Beast” as they call it, the team used simple things that a typical Guyanese would run into on a daily basis. Team Manager, Farnaz Baksh, one of the two female members of the team, said that the robot was designed using inspiration from around Guyana’s coastland.

According to Baksh, one of the problems faced while building the robot was finding a way to build the ‘pull up’ mechanism without disrupting the equilibrium of the robot. Inspiration is something that can come from anywhere and to address the issue, you would not believe the idea the team came up with.

“We thought of our koker system in Guyana,” Baksh stated. The young lady explained that “those doors are way heavier, so is the gear mechanism behind it, so that it lifts all the weight. Some of the students went and inspected it and saw how the gear works and which go where, so it was between turk and speed, we needed more turk and less speed, so that’s how come we used a larger sprocket”.

The young lady said that studying the koker system helped the team to receive full points in all of their matches. The Koker system is one that is centuries old, designed by the Dutch as part of their drainage and irrigation system. At high tide the kokers form a barrier between the Atlantic Ocean and the canals. When the tide is low, the koker door opens (rises) and drains the excess water off the land.

An exercise in the competition called the team was required to pick up balls on the playing field which represented water and deposit them in reserves or at the laboratory. To overcome this challenge, Baksh said that the combination of the ‘rice combine’ which is used to harvest rice here in Guyana to pick up the balls and the design of “clothes line” to pull the balls up.

The idea she said came from their coach, Ricky Chan. “That inspiration came from the rice combine right here and that was so fast compared to all other bots. We had to pull a conveyor, it was pulling the shaft together and then Ricky the coach he thought of using a clothes line, in Guyana we use clothes line, the weight of the clothes it carries up, so we were like yeah, let us use that. So we actually put an excursion to hold the two shafts apart” Baksh explaineded.

First Lady Sandra Granger applauded the brilliance of the team and is encouraging youths to become innovative. The First Lady said that it is important that youths get accustomed to technology adding that they must also be interested in what goes on within the devices they use.

“Technology will be here with us and maybe supplant some of us at the rate it is going. For agriculture, we can see the use of drones, see the use of it in weather forecast, medicine, it is happening already so all we have to do is take it and use it,” Mrs. Granger explained.

Team member, Christopher Nelson believes that “we (STEM Team) have the responsibility to capture some youths to be involved in robotics”. Nelson pointed out that many persons believe that robotics is only for “high fliers”. However, Nelson is advocating that the belief is a myth and that anyone can venture into the field once they put their minds to it.

“What we need to continue to do is to motivate the youths to come out or to be involved in stem so that Guyana in the future could become a better place” the young man explained.

Director of Sport, Christopher Jones believes that the STEM team has opened the doors for a new breed of innovative youths. Jones through the National Sports Commission is one of the many stakeholders that supported the team prior their performance in Washington, D.C.

Jones said that the team’s performance in such a major competition, that was alien to Guyana a year ago, has shown the potential the youths have Guyana have once given the opportunity.

The sport Director is of the view that “no one, no Ministry will deny funding or access to funding to support initiatives like this throughout the length and breadth of the country”.

The next global challenge is scheduled to be held in Mexico City in 2018 and STEM Guyana will be seeking to build on what they have learnt and come out on top.