Minister of Business, Dominic Gaskin, recently presented to Brazilian farmer and investor, Nelson Itikawa, a lease for 5,000 acres of land through the Guyana Lands and Surveys Commission (GL&SC). Itikawa will be developing a rice farm using advanced technology and soil corrective techniques in the South Rupununi Savannahs. 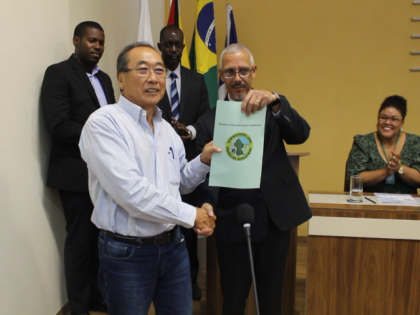 Minister of Business, Dominic Gaskin handing over the lease for 5,000 acres of land to Nelson Itikawa. In the background is CEO and Commissioner of the Guyana Lands and Surveys Commissioner, Trevor Benn

Minister Gaskin said that such an investment shows that investors are, “confident in Guyana’s economy” and the country is ready for business. Minister Gaskin added, “Our economy has responded well to these new developments which have demonstrated that Guyana not just has the physical space, but the economic space to accommodate expanding sectors,” Gaskin said.

Government will continue to ensure that a level playing field exists for all companies and persons who do business in Guyana, and play their role in strengthening the local economy, the minister stated.

Lending support to initiatives is the Guyana Office for Investment (GO-Invest), under the supervision of Chief Executive Officer (CEO), Owen Verwey. He said that many businesses have expressed interest in investing in Guyana. He noted that the agency will be more proactive on the international scene, promoting the opportunities for investments, while ensuring that the country and the agency attract the right types of investments for Guyana.

Verwey told the Government Information Agency (GINA), that, “this agency is happy to welcome such an investment to the country.”

Throughout the year, the investment portfolio of GO-Invest will be restructured to ensure greater diversification within the economy.  There will be additional focus on the tourism, agriculture, and light manufacturing sectors as the agency will target $139.8B in investments.

CEO and Commissioner of the GL&SC, Trevor Benn said that the commission is confident that Itikawa will develop the land which will not only see economic benefits to himself, but Guyana as a whole.  Benn said such a step by the GL& SC expresses the seriousness of the agency, GO- Invest and the government.

Benn said that Itikawa has brought to Guyana the impossible, which is rice in the savannahs. He said that it is due to this initiative the agency wanted to demonstrate to him and the people of Brazil, gratitude for what he has been able to do.

Itikawa expressed gratitude to the Government of Guyana and the other agencies for trusting him to invest in the country. He said that Guyana has been wonderful to him thus far, and he will continue to work with the relevant agencies.