“It is this positive attitude and team spirit that will propel the industry forward and undoubtedly continue to contribute to its future success.” …Minister Holder as GuySuCo honours Champion Employees

Today the Guyana Sugar Corporation (GuySuCo) honoured several of its outstanding employees for 2015 at their annual Honour Roll Function at the Albion Estate Staff Club in Berbice. This year, persons were honoured under the theme “Honouring our Champions 2015” and saw a number of long-standing employees of the sugar corporation and their families coming out to receive various awards.

The aim of the honour roll ceremony is to recognise and award employees with outstanding performances as champions in their respective areas of operations. The event also serves to motivate others as GuySuCo strives to maximise its contribution to the social wellbeing of Guyana. 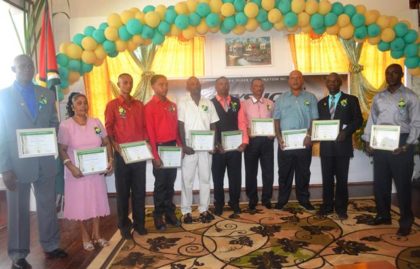 During his feature address, Agriculture Minister Noel Holder expressed he was pleased to be a part of such an event. “It is you, the employees, who are the main reason for the corporation exceeding the 2015 production target by 3,627 tonnes. Therefore, it is a pleasure to join with the Board and Management to honour you.” Minister Holder said.

A total of 29 employees were honoured today and received certificates, cash prizes and other tokens of appreciation. The winners were selected based on their performance, willingness to work, multitasking abilities among other criteria and came from Skeldon, Albion, Wales, Enmore and a number of other estates. 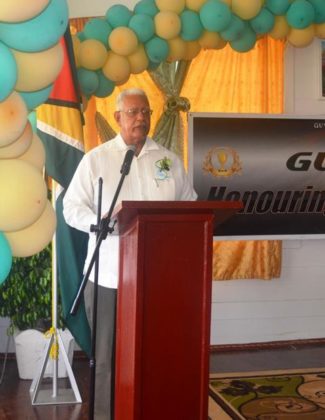 Also speaking at the ceremony was the CEO (ag) of GuySuCo Mr. Paul Bhim. He commended all the recipients of the various awards for their outstanding performances and added that “Each of you are champion workers as you definitely excelled even with the harsh effects of El Nino.”

Given the state of the industry and the need for diversification GuySuCo is being rebranded as “The New GuySuCo” and will see the Wales Estate being the first estate to undergo the diversification process. Minister Holder also made reference to this stating that “to be a motivator for all employees within the industry, the ‘One GuySuCo’ and ‘Putting GuySuCo First’ campaigns are very good team building, collaborative initiatives to promote shared values among the employees to achieve this New GuySuCo.  I am certain that this will be translated into the exemplary performance and work ethic of our human resources. It is this positive attitude and team-spirit that will propel the industry forward and undoubtedly continue to contribute to its future success.” 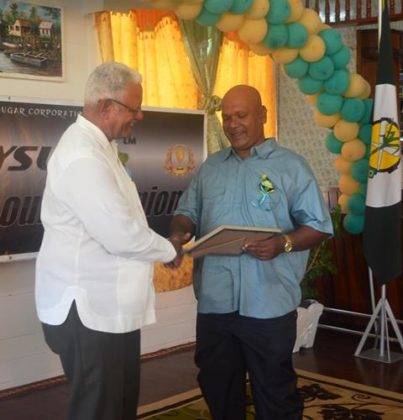 Minister Holder congradulates one of the awardees