Former workers of the Guyana Sugar Corporation (GuySuCo) will soon have a chance to retool and start over, as state lands will be made available to them.

His Excellency President David Granger this evening announced the establishment of the State Land Resettlement Commission, which he explained, will give the ex-sugar who were affected by the downsizing of sugar estates another chance. 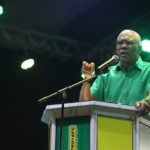 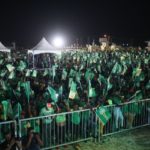 Supporters at the Coalition rally in Leonora, Region Three.

“We are going to establish a State Land Resettlement commission so that persons who have been out of work because they have been in the sugar plantation will be given access to lands so that they could start over again. Those who want to farm will be able to farm; those who want housing will get land for housing. This is what a caring government does. A caring government looks after its workers,” he told a West Coast Demerara rally at the Leonora Track and Field ground.

The Wales sugar estate on the West Bank of the Demerara in Region Three was one of four sugar estates identified for restructuring over the last few years.

“We did not do this uncaringly. We know the problem. Sugar cannot be sold on the world market at the cost that it is being produced at Wales. But we did not throw Wales under the bus. We amalgamated Wales with Uitvulgt. And many of the persons in Wales have gotten jobs in Uitvulgt,” the Head of State assured region three residents.

According to the President, the administration had to make a “difficult decision, but we thought hard and long,” especially since the industry in Region Three needed to be preserved and protected the sugar industry in the region.

“We are not leaving the sugar workers on their own. We care for workers. But we cannot continue to produce sugar at that cost. Sugar workers will be able to go on to those lands and to use it for any purpose of their choice”

The Head of State reminded that the problems facing the sugar industry started under the previous administration and made mention of the more than 5000 workers that were sent home by the PPP between 1992 and 2015.

Meanwhile, the president reiterated his administration’s continued focus on education and reminded of the 40 buses, hundreds of bicycles and dozens of boats that form part of the 5B’s programme.

Expanding on his Decade of Development, the President noted that a special public education assistance grant will be given to every family that ensures that their children attend school.

“We are going to put oil money in your pockets,” he proclaimed.

Turning his attention to the region, President Granger urged residents to keep the PPP’s hold on the region at bay, especially since its score had been depleting over the years. “Under Jagdeo, they had 65 percent. Since Jagdeo took over, all of the scores have fallen in Regions Two, Three, Five and Six.

“This is a great moment for the people of Guyana. It is a moment that has not happen before. The PPP that had a grip on this region, cannot stop the people from bringing about change,” the Head of State said.