Minister of Public Infrastructure, Hon. David Patterson said works on the Demerara Harbour Bridge (DHB) will be completed by the latest tomorrow morning, allowing for the resumption of light traffic flow across the Demerara River.

The minister gave an update on the situation at the DHB this morning on the National Communications Network (NCN) VYBZ 100.1 FM.

He said the unfortunate incident which occurred around 1am today, saw a barge, which was being captained by non-English speaking nationals, slamming into the bridge causing severe damage. 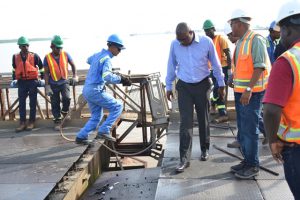 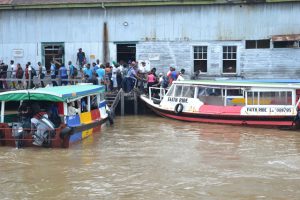 Commuters boarding the speed boats to get to work and school. 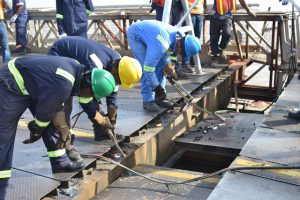 Emergency repair works being carried out on the Demerara Harbour Bridge.

At the time of the incident, a car was crossing the bridge and was caught in the damaged area. The driver of the car is currently resting at home, after receiving medical attention, he related.

Minister Patterson said the damage to the bridge, while repairable, is extensive. In particular, he noted that the damaged anchorage points may take a little longer to repair; since these works can only be carried out during the low tide.

Following the incident this morning, residents reverted to the speed boat service at the Vreed-en-hoop Stelling. Minister Patterson said given the situation, permission has been given for the service to be extended later into the evening.

“The only access now that persons will have, are with motorcycles. We are still allowing them to cross and walk over the bridge,” he said.

Meanwhile, he assured that in any cases of emergency, the Guyana Maritime Administration (MARAD) can be contacted so that an emergency boat can be used from either side of the Demerara River.