Linden has seen massive development in the last two years compared to the previous years. This was highlighted by Mayor, Carwyn Holland at a press conference held at Linden’s Town Council on Tuesday. 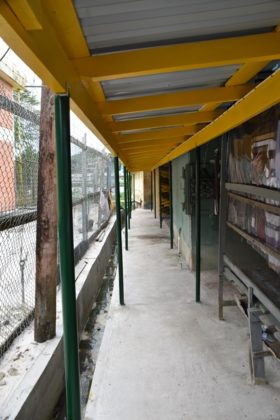 Rehabilitated walkway leading to the sanitary facility at the Mackenzie Market.

Holland explained that some of the long-awaited rehabilitative works on the Mackenzie Market were completed, including rehabilitation of the walkway which leads to the sanitary facility. Additional repairs to the market will be completed by the end of November.

Wismar Market has also benefitted from some upgrades. The market is now lit with street lights and has been sprayed to prevent infestation of wood ants. More lights will be added and the fence will be upgraded shortly.

Holland explained that efforts are being made to erect street lights around the town especially in those communities in dire need. “We would have recently purchased 80 street lamps and we are looking to distribute 10 in each constituency, however, we’re awaiting several street lamps from the Japanese grant coming under the Ministry of Communities; once they (street lights) become available soon we will have them placed within the municipality.”

For many years, there have been calls for lights on the Linden Soesdyke Highway. The Mayor announced that this will soon become a reality. “Government is looking at a $40M budget, I just have to double check the numbers with the Minister of Infrastructure, but next year, 2018, we’re hoping to see some upgrade of the Linden Soesdyke Highway and some lighting of the highway.” Other developments include cleaning and drainage works among others.

However, amidst the development, there are challenges in the township; with the unavailability of jobs being the main concern. Mayor Holland said employment remains a sore issue and repeated a call to the National Industrial and Commercial Investments Limited (NICIL) to release the Kara Kara Call Centre to the people of Linden. He opined that it will employ over 500 young people.

Another challenge is the erosion of revetments especially those at Speight Land. Holland recommended a revetment programme be implemented immediately since it will not only “save lives and preserve several homes” but will also provide jobs.

These completed improvements are positives for the township, Mayor Holland said, and while more is yet to come he is optimistic that greater things are forthcoming for Linden.