Staff WriterOctober 6, 2017
October 6, 2017: The board of the Linden Utility Company was today, October 6, 2017, sworn in, with Minister of Public Infrastructure, David Patterson, calling for an improvement in quality electricity supply to the mining town.
The new board members are Chairman, Mr. Tracy Johnson; Members Mr. Elwyn Marshall, Mr. Mortimer Mingo, Mr. Horace Williams, Mr. Leslie Gonsalves, and Mr. Renford Homer, who is serving as a representative of the Guyana Power and Light Company Inc. A member representing the Parliamentary Opposition is yet to be appointed. 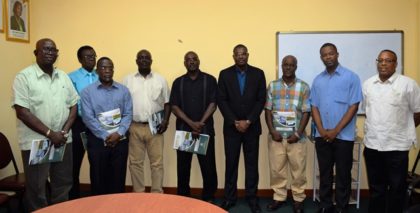 In brief remarks to the board, Minister Patterson encouraged the new members to dedicate their time diligently and to work with a unified agenda. He further stressed the importance of innovation and suggested that the board undertake new, feasible avenues, such as implementing renewable energy projects, where necessary. “Overall, I want you to provide a higher level of service to the residents of Linden,” he said.

Representatives of the utility company were also praised for successes, such as relatively low technical and commercial losses and an impressive revenue collection rate higher than 90 percent. While Minister Patterson noted that there was room for improvement, he applauded the company for its efforts and encouraged the board to aim for greater achievements.
Representatives also shared that the company has plans to upgrade its decades-old network through the rehabilitation or replacement of equipment.
Meanwhile, Mayor of Linden, Mr. Carwyn Holland, who was present for the ceremony, shared with Minister Patterson some areas that would need assistance from the Ministry of Public Infrastructure, such as the provision of electricity to unserved areas in Linden. Insufficient drainage within communities were also raised as an area of concern.