A Linden couple, Haslyn and Audrey Graham are lauding the Small Business Bureau (SBB) for coming to their rescue when an act of nature put their business on the brink of collapse last year. 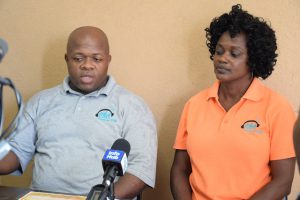 The Grahams run Linden Wireless Communication Network also known as 104.3 power fm. In 2017, they suffered a major setback when a power surge, caused by lightning, damaged their equipment. This meant restarting from scratch. But with limited financial resources, their options were few.

Haslyn recollected that they began planning to acquire the necessary equipment to furnish the station. However, due to their financial constraints, they took the decision to seek other avenues to obtain a loan. They turned to the Small Business Bureau.

“We learnt of the government helping to finance or put some of the collateral, based on the amount that you want to borrow. We were able to get some additional equipment that we really wanted to expand and continue to push our project”, Haslyn said.

According to Audrey, acquiring the loan was “very easy. We applied for the loan in late March of 2017 and by mid-April, we received that loan from the bank.”

The Grahams also received sound business advice. “The Small Business Bureau helps you to manage your business in a better way. It helps you to put proper systems in place and that is where we were able to have a better account established in Republic Bank. They not only give you a loan and forget about you. They also come back and check you to make sure that you’re ok, and they call you if there are opportunities” Audrey added.

Linden Wireless Communication Network garners much public support since the station focuses mainly on issues in the community. The station was launched on October 19, 2013, and has employed several youths in the town as presenters. It currently offers two hours of free air time to local officials.

The proprietors are currently applying for another loan with the aim of expanding their reach to other parts of Region 10 such as Kwakwani and Rockstone.