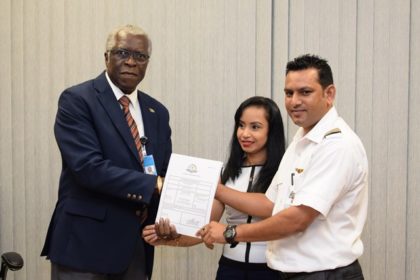 The certification process which began in November 2016 is one of the most important requirements in the International Civil Aviation Organisation (ICAO) oversight system. It gives the airways liberty to offer chartered flights and to conduct scheduled and non-scheduled operations for hire.

GCAA’s Director General explained, “Before an operator can operate for profit and reward he is expected to display and to show that his operation has all the components required by ICAO and that he can ably and also safely conduct the operation as stated by ICAO.”

According to the Director-General, the certification process involves five phases; the first phase is the pre-application phase where the applicant states his intention. For the second phase, the applicant submits a formal application accompanied by the operational and maintenance manuals the operators will be using.

In the third phase, the GCAA conducts a review of all the documents to ensure they are in full compliance with all the regulations and ICAO standard recommended practices. “It’s a back and forth exercise because most times the applicant does not include all the documents in the manual so these corrections are made and sometimes it takes months with the documents,” Field explained.

Provided that the documents are correct, the fourth phase or the demonstration phase commences. During this period, the GCAA will conduct inspections of the operator’s facility and the training conducted.  A demonstration flight is also done in this phase under observation by GCAA.

The final stage is the certification phase, where the operator, having met all the requirements is certified to operate both privately and publicly.

Some of the representatives from Domestic Airways Inc. present at the Certification ceremony.

“I always add a sixth phase which is conducting the oversight of the authority of the operator. That phase is to ensure that you not only maintain the standard you set at the time of certification but you continue to elevate and proceed on an upward path in your operation,” Field stated.

Prior to the certification, Domestic Airways Incorporated operated privately. Captain of the Airline service, Orlando Charles is grateful that the airways can now operate publicly as well.

“We have been using our aeroplanes for private, not for public or monetary gain or for charter. With the conclusion of the application process and the certification, we are now eligible for charters from individuals or companies. I am very thankful to the Civil Aviation Authority for this opportunity,” Captain Charles said.

Domestic Airways Incorporated has been in operation for approximately three years.