Fifteen (15) local businesses will benefit significantly from the global business forum – Society of Petroleum Engineers (SPE) Offshore Europe. Through a collaboration with the British High Commission in Guyana and the Georgetown Chamber of Commerce and Industry (GCCI), the local companies will be exposed to the EU-based Business Forum which connects Global Upstream, Offshore and Oil & Gas communities.

The forum will run from September 3-6 in Aberdeen Scotland. Every two years, the Society of Petroleum Engineers (SPE) usually hosts an offshore event which is said to be Europe’s largest oil shore industry in Aberdeen.

President of the Georgetown Chamber of Commerce and Industry (GCCI), Nicholas Boyer.

Earlier today, the UK Ambassador to Guyana, H.E. Greg Quinn and representatives of GCCI held a joint media briefing on the upcoming event.

“Currently, we have 15 companies that are confirmed on the mission and we are expecting out of those 15 companies to have about 20 delegates with some company feeling more than 1 delegate,” GCCI President, Nicholas Boyer explained.

However, this current mission to Aberdeen includes members from both the private and public sectors. Boyer noted that this initiative aligns with Guyana’s relationship with the United Kingdom from an oil industry perspective, which will be strengthened.

The chamber began its relationship with Aberdeen Scotland in November of 2018. Through this association, enhanced education, training and skills development projects were realised.

The High Commissioner highlighted that there will be a variety of activities which pertain specifically to Guyana’s specific happening in that week. He added that the forum would provide opportunities for the local companies to network with other organisations in the United Kingdom.

“I think that there is an expectation that this will help jump the relationship to another level.” H.E. Quinn remarked. 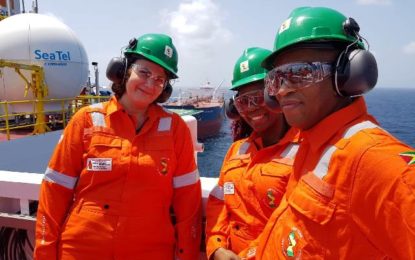 Author Details Anara Khan Author email anara.khan@dpi.gov.gy DPI, Guyana, Wednesday, February 19, 2020 Guyana has lifted its first one million barrels of crude in time for its 50th anniversary as a republic. The crude was transferred on Tuesday onto the oil tanker Cap Philippe, which was chartered... END_OF_DOCUMENT_TOKEN_TO_BE_REPLACED