Five commissioners were present for the inaugural meeting of the recently established Local Government Commission, (LGC) today in boardroom at the Ministry of Communities, Kingston.

The commission which was sworn in on October 23, was mandated to have their session immediately following its establishment. 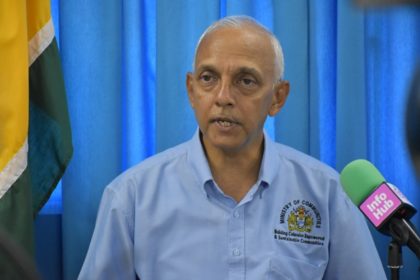 At the scheduled meeting, Minister of Communities Ronald Bulkan said members were briefed on the importance of crafting a workplan given the urgency of their mandates.

“A meeting was scheduled for today (October 27) at 1pm and this was communicated to all members in an email correspondence… it was my hope that they all could have attended and participated. I was now made to understand that a meeting was held and the three PPP (Peoples’ Progressive Party) members did not attend.” Minister Bulkan explained.

Bulkan said that he had been advised that the meeting was adjourned and rescheduled to Tuesday, October 31. This time it will be facilitated at Parliament Buildings.

He added, “Today’s meeting constitutes a formal one, because under the legislation three members comprise a quorum so any decisions that would have been made today is certainly official.”

Briefing media operatives after, Commissioner Mortimer Mingo said the agenda item for today’s meeting would have included the appointment of offices which will ensure that the commission is effectively managed.

“The agenda item should have been the election of the chairman of the commission as well as the deputy chairman,” Mingo said. He added that the hope was that the work of the commission would have commenced immediately “hence dodging delays to meet and appoint office bearers.” 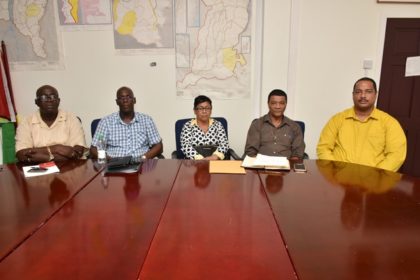 “We have a very huge responsibility of overseeing the local government organs of this country and we thought we would have been able to carry on with the commission’s business.” Commissioner Mingo noted.

Other items on the agenda would have include budgeting for the 2017-2020 period, establishment/identification of a building to facilitate the operations of the commission, employment of technical, clerical and administrative staff along with the drafting of a workplan.

Meanwhile other commissioners present at today’s meeting look forward to working together to address the needs of the local government body. “We want to ensure that there is absolute adherence to the principles of good governance as far as the conduct of our business is concern.” Commissioner Andrew Garnett said

Commissioner Clement Corlette also added that, “We believe the commission should work collectively in bringing about the necessary supervision and improvement to the local government system in the country and its for that reason we didn’t proceed with the business at hand. To give a chance to all the assigned commissioners to be on board.”

Commissioners absent from the meeting, were Norman Whittaker, Clinton Collymore and Carol Sooba.