May 26, 2017
GUYANA, GINA, Friday, May 26, 2017
Residents of Mahdia, Region Eight joined the rest of Guyana in celebrating the country’s fifty-first anniversary as a politically independent nation at a flag raising ceremony last evening. 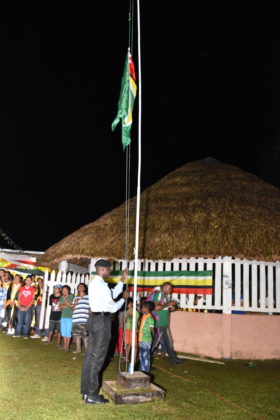 They were led by Minister within the Ministry of Natural Resources, Simona Broomes, along with other regional officials.
The celebration saw residents coming out in their numbers to observe the event which was filled with national songs being sung by students of both the Mahdia primary and secondary schools, along with cultural dances and skits.
Minister Broomes in delivering the feature address, said that it was not only an honour, but a privilege to be given the opportunity to observe Guyana’s independence anniversary in Mahdia, which holds a special place in her heart. 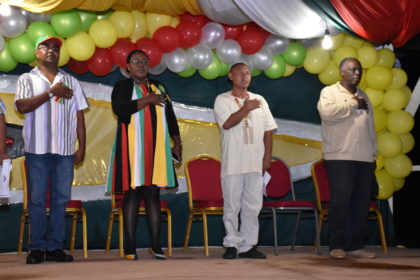 (left to right)—Acting Regional Executive Officer, Gavin Dounga, and Minister within the Ministry of Natural Resources Simona Broomes decked out in the country’s national colours, and Toshao Ivan Pio and Reverend Aubrey Skeete as they recite the National Pledge

The Minister told residents that Mahdia is “destined for greatness” as it was earmarked to receive township status, and will soon take its place alongside the other towns in Guyana.
The Minister urged the residents to be prepared for what the government has in store for the community, and by large the region. This includes providing the necessary infrastructure.
The Minister told residents that the government will soon be rehabilitating the road and the Denham Suspension Bridge that links Mahdia to Bartica.
“Mahdia is rising. It has infrastructure challenges, but it also has a caring government, a government that is committed to its growth and to its development,” Minister Broomes stated.
The Minster told residents that as Guyanese and being able to reach another milestone as an independent nation, “your mind set should be one of optimism, one of anticipation, for with township beckoning, and with the investment in infrastructure being a commitment from your government, you can rely on progress and growth.”
Acting Regional Executive Officer, Gavin Gounga told residents that ever since Guyana became an independence nation, the government has worked tirelessly to develop the nation. REO (ag) Gounga said that he is of the hope that the residents are conscious of where Mahdia was, where it is now, and where it is going, pointing to the infrastructural development ongoing in the community.
“We had laterite road, now we are having concrete road, a major development… we are transforming this country and this region, and as you can see, our government is working tirelessly to change the lives of every Guyanese,” Gounga explained. 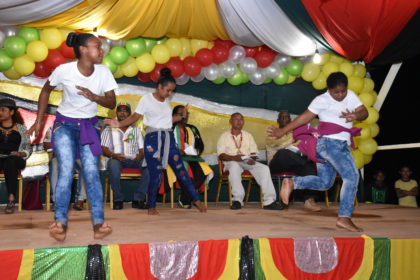 However, the acting REO reminded residents that the government cannot singlehandedly develop a nation, pointing out cooperation is needed to build the nation. “We cannot expect government to do everything… we must come forward and ask ourselves what we can do for our country, to build this country.”
Guyana, the acting REO said, is a much safer country where people can express themselves without the fear of being victimised in one way or the other when compared to a few years ago. “In our country,” the acting REO stated, “we were scared to speak, we were scared to move, today, we can move freely in our country because we have situations where for example, crime is on the downside.”
On May 26, 1966, Guyana gained its Independence from Great Britain. The British flag, the Union Jack was lowered and replaced by the Golden Arrowhead.
by: Isaiah Braithwaite 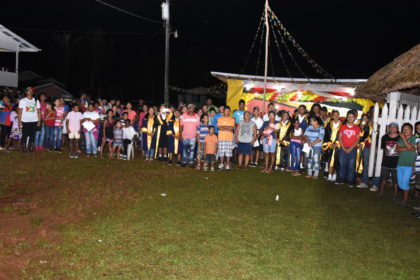