April is Occupational Safety and Health Month and the Ministry of Social Protection, Department of Labour launched a series of commemorative activities with a march on Sunday, April 2. The march ended at Jubilee Park, Homestretch Avenue.

Occupational Safety and Month is being observed under the theme, ‘Optimize the Collection and Use of OSH Data’.

Minister within the Ministry of Social Protection with responsibility for labour, Keith Scott, in an address to participants, noted the 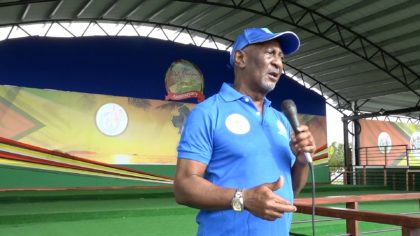 Minister within the Ministry of Social Protection, Keith Scott addressing the gathering after the march

“We can tell and predict when an accident can occur in advance from data, so we are now moving to the point where we are going to be making full use of data collection,” Scott said.

The Minister said that on April 28 when World Day for Safety and Health at Work would be observed, emphasis will be placed on using data to better protect workers.

Minister of Public Infrastructure, David Patterson used the opportunity to stress the importance of employees adhering to safety procedures as it is pivotal in developing the economy.

“Any lost time due to an injury (or) down time in the organization, whether it’s the aviation sector, the maritime sector or even in your own workplace, lost time contributes to a loss in our economy. We all have to put our best effort to ensure that we, as a country, observe all the regulations of Occupational Safety and Health,” Minister Patterson said in his address at Jubilee Park. 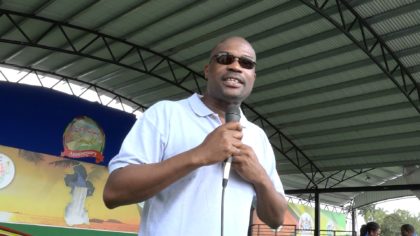 Minister of Public Infrastructure, David Patterson, addressing the gathering after the march

The Minister of Public Infrastructure explained that his ministry has technical personnel in the Aviation industry or at the Demerara Harbour Bridge Corporation who are specifically tasked with hazardous duties and responsibilities. He noted that if precautions are not taken, many lives could be lost and there would be no travelling by air or land, which would inconvenience many.

Minister of Public Telecommunications, Cathy Hughes urged workers to look out for each other. She says everyone has their role to play in ensuring safe working environments.

“As employees in companies and ministries, wherever you are, each and every one of us has a responsibility to promote safety and health standards and procedures. It means that if you see something that could be a potential 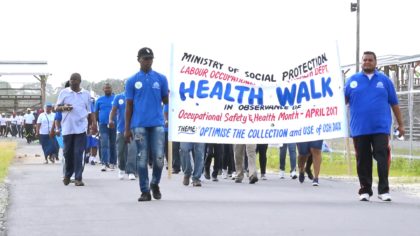 Employees from the Ministry of Social Protection, Department of Labour at the recently annual march 2017

threat to any of your co-workers you have a responsibility to report it,” Minister Hughes pointed out.

She added that the aim is to promote and protect employees who are the most valuable assets at an organisation.

The minister highlighted that there is more work to be done for employees especially since there are many accidents on the roads, in offices, factories, mining community or other places of employment.

Hughes assured the workers of the government’s commitment to protect and serve all workers in Guyana.

Present at the march were participants from the National Insurance Scheme, Civil Aviation Society, Guyana Defense Force, Qualfon and Demerara Bridge Corporation, among others.