The Mashramani 2018 Float and Costume parade came to a conclusion with parades on Saturday in Lethem, and Sunday in Linden and Berbice.

Thousands braved the inclement weather to participate in the Linden festivities. The five largest floats were represented by the Town Council, Regional Democratic Council, Ministry of Natural Resources, Ministry of Social Cohesion’s Department of Youth, Culture and Sports. 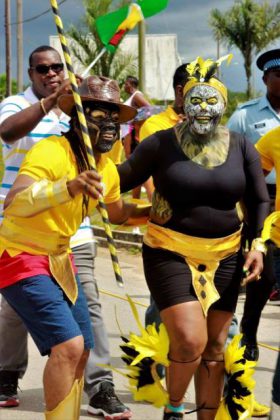 Member of Parliament Jermaine Figueira and Minister within the Ministry of Natural Resources Simona Broomes on the road Sunday March 5 with the Ministry’s band (photo courtesy of Lennox Gasper).

Minister within the Ministry of Natural Resources Simona Broomes was in Linden to participate in her Ministry’s band.

Despite the rain, thousands turned out to witness the floats. Revellers decked out in colourful outfits gyrated and marched, from the Mackenzie shore across the Mackenzie /Wismar Bridge all the way to the Bayroc Community Centre Ground for a grand finale. Party trucks blasting up-tempo music kept the atmosphere hyped throughout the route.

Out-going Mayor Carwyn Holland opined that the region’s entertainment industry is on the rise, after years of stagnation, “We can see the drive is there for the people, the people are excited”, however, persons ought not to stray too far from traditional celebrations. We want to see more of it being reflected in our costumes come 2019.”

He further explained that if the region is to host the Nations 50th Mashramani celebration, more local businesses and individuals will have to participate come 2019. Holland said the region will also have to improve infrastructural works at the Bayroc Ground. “There will be an effective parking space, better management along the route, and better overall planning”, Holland explained.

Member of Parliament Jermaine Figueira, who was part of the energetic parade stated that, “Linden’s Mash 2018 personified the work of the government in pushing Guyana forward with respect to the massive turn out we would have had.” Figueira added that many persons “are exhibiting more confidence in the government in every respect,” and reiterated Holland’s call for more to be involved if the town to host 50th Mashramani celebrations.

This is the last month with Holland will serve as Mayor. Waneka Arrindell assumes duties from April 1, 2018. Holland said he is very proud and happy to have led the Linden contingent at the last mash, and the part he has played in developing the region. He plans to focus his time and energy on the Guyana Association of Municipalities (GAM).

“When I became Linden’s Mayor, they called it a ghost town. Linden is no longer seen as a ghost town. Check around the five corners, businesses are popping up rapidly. Our economy is growing and it comes from hard work, and doing little things in the community. However, there is so much more that could have been done”, he noted.

Linden is the birthplace of Mashramani following independence in 1966. Though the celebrations started out as a carnival, it was soon transformed into a national celebration in 1970. 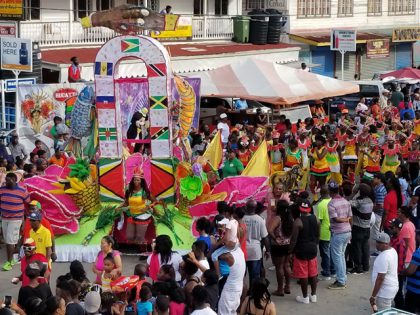 Meanwhile persons from all walks of life took to the streets of New Amsterdam to celebrate Mashramani 2018. The float parade moved off from the Tacama Turn (Marks Bridge) and made its way to the State House Lawns via the Main Road and into Vryheid Street.

Regional Executive Officer, Kim Williams-Stephen who led the Regional Democratic Council’s float, was satisfied with the turnout of both spectators and revellers. She noted with Linden and New Amsterdam hosting their float parade on the same day, the floats from Georgetown had to be divided between the two towns.

Chairman of the Region Six Mashramani Committee, Mr. Claude Henry, said that when the float parade moved off from the starting point with more than 400 persons, but arrived at the final destination the number vastly increased.

According to Mr. Henry, among those participating were the Ministry of Education, Ministry of the Presidency Department of Social Cohesion, Culture Youth and Sports, Felix Austin Police College Adventure Berbice and the Ministry of Health.

REO Williams-Stephen is optimistic that Mashramani 2019 would be bigger and better, particularly if the private sector comes on board. 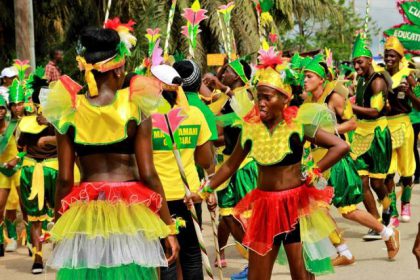 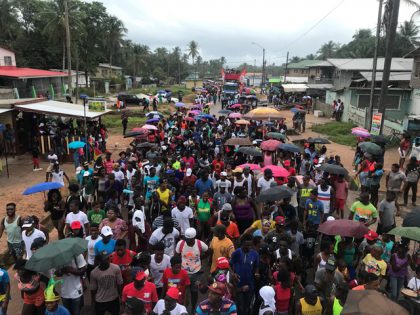 Thousands brave the rain for Mash celebrations in Linden. 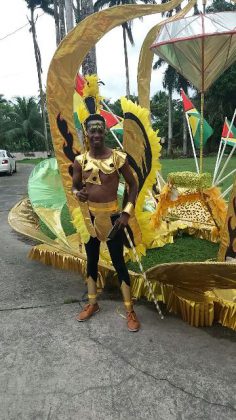 costumes of the Ministry of Natural Resources band. 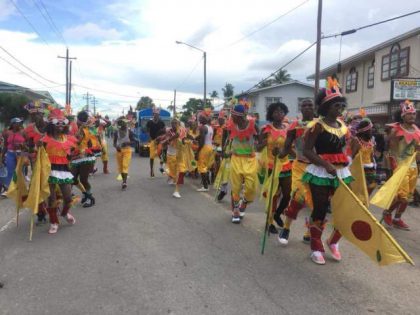 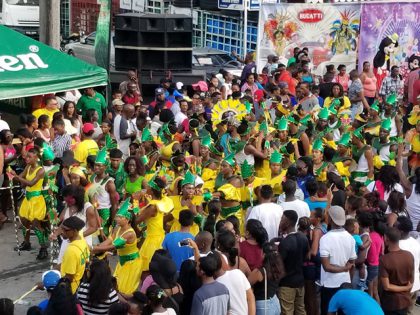 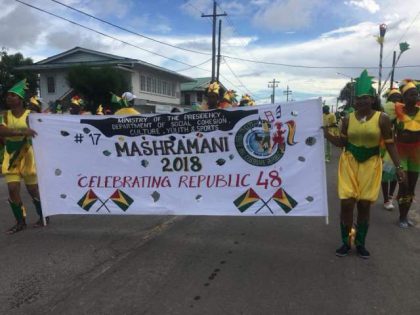