Acting Director of Prisons, Gladwin Samuels said that twelve of the living quarters earmarked for prison staff at the modernised Mazaruni Prisons have been completed and a further eight are set for completion this year.

“Twelve houses were constructed last year and an additional eight will be constructed in 2018. Last weekend the advertisement went out for the first four of the eight houses, the tenders are supposed to be open this week so more than likely the contract would be awarded soon.” 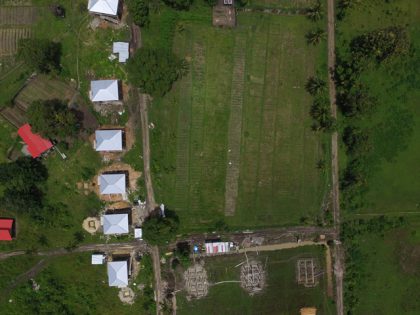 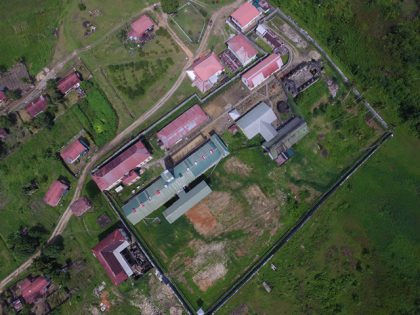 Midair view of the area designated for the prison’s construction

In an interview with the Department of Public Information (DPI), Samuels noted that along with the completed twelve houses, the installation of its new generator in 2017 and prospective solar panels in 2018, the Guyana Prison Service (GPS) also plans to increase the number of hours during which electricity is provided on the island facility.  This, Samuels said, will not only make the officers’ stay a more comfortable one, but will also aid its electronic surveillance security system and increase the opportunities for its skills training programme.

“It will increase our ability to be able to offer skill training to prisoners because most skill training requires power tools and it restricted the capacity of the prison to offer training in carpentry and other such areas that would require the use of power tools when power was not adequately available. We are also looking at the installation of solar panels which will also complement the generators especially for our CCTV expansion which will be part of our 2018 project as well.”

According to Samuels, these upgrades are in keeping with the budget request of the GPS and the recommendations from the Commission of Inquiry (CoI)