-drainage issues to be fixed

Minister of Local Government and Regional Development, Hon. Nigel Dharamlall today assured Industry residents that their concerns over construction on a disputed piece of land are being addressed.

The Minister met with the residents at the construction site Area ‘J’ Industry, East Coast Demerara where the Industry/Plaisance Neighbourhood Democratic Council (NDC) had on Thursday issued a cease order to resident, Mr. Roland Dhanraj, who had erected an illegal edifice. 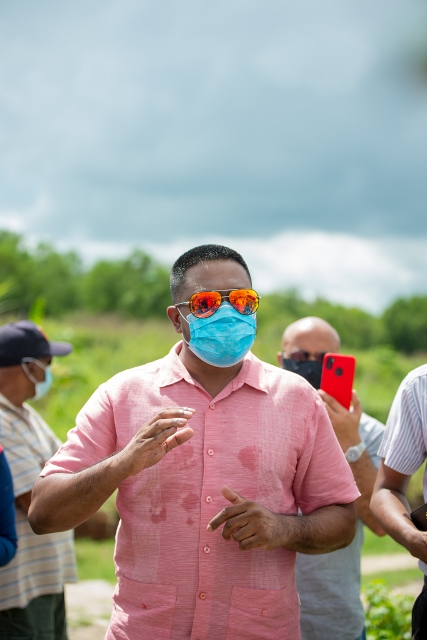 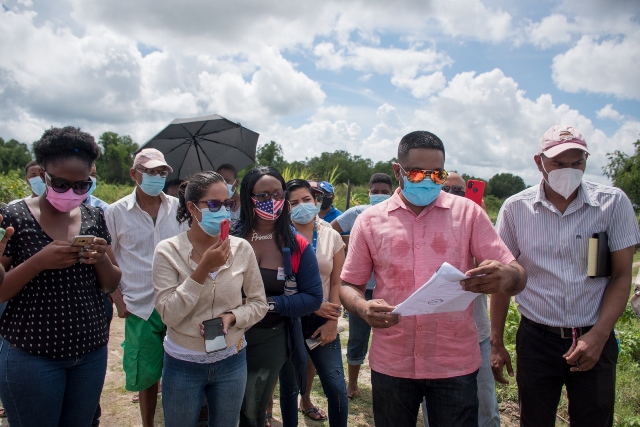 Minister of Local Government and Regional Development, Hon. Nigel Dharamlall looks at a copy of the transport. 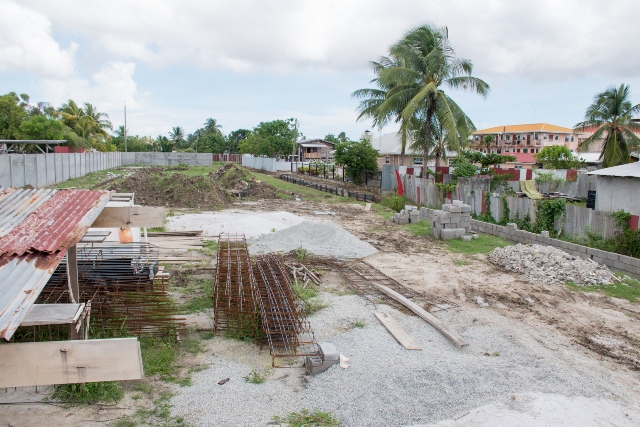 Minister Dharamlall told DPI that in August residents raised their concerns to him about the illegal construction. Since then, a technical staff of his Ministry was deployed to the area to investigate the claim.

“The problem we have here is where on individual claims ownership via transport, whether legitimate or not, of this piece of land. Apparently, that transport dates back to April 2014. The residents here are claiming that since then that individual has been trying to do construction but they have protested against it,” he explained.

Only recently, the Minister said, construction was started on a huge fence.

“In our investigations, the NDC did not receive a plan from the individual nor ownership documents and so I instructed my officers to meet with the NDC on November 5 and for them to get a cease order against the construction. We also were able to get the Police involved. The cease order was served upon the individual who claims ownership of the land, and we are where we are at this point in time,” he added.

Minister Dharamlall also said that due to miscommunication between the NDC and the residents, they wrongly believed that the Ministry was not addressing the matter.  “The process takes a while. Investigations have to be done, notices have to be served, and that basically took the better part of a month and a half and so we are at a point now where the NDC has been instructed to ensure that they determine the authenticity of the person’s transport and the origin of the transport,” the Minister explained.

The Minister has also engaged the National Industrial and Commercial Investments Limited (NICIL) CEO, Mr. Radha Krishna Sharma, on the issue. Minister Dharamlall and Mr. Sharma visited the site in September where it was revealed that the sale was done by the Guyana Sugar Corporation not NICIL.

The Minister further explained that “The entire construction is illegal because there is no plan. There is no approved plan and there is no permission so as we move forward, I think the NDC will have to take more condign action against this individual with a view to possibly demolishing, if they determine that they are in contravention of a construction permit.”

Residents have complained of flooding since the recent rains due to clogged drains. The Minister pledged to send engineers to the area to address this matter.

Meanwhile, resident, Member of Parliament, Hon. Sheila Veerasammy questioned Mr. Dhanraj’s access to the land.  “He had no right to come here because this is seventh bed, its title land. What we are questioning here is how did he come about getting a transport in a community that is a sugar welfare owned?” she said.

Regional Chairman Mr. Daniel Seeram asserted that the section of land should be barricaded and signs posted until the documents produced can be verified. He is optimistic the portion of land can be developed properly after the matter is resolved and a drainage assessment conducted.

Minister Dharamlall further noted that the NDCs are functionaries of the Ministry and must ensure due process.

He also noted that there are similar issues in other areas.

“The NDC in BV/Triumph, APNU+AFC controlled NDC leased land to someone for $500,000 per year and that is prime location that could have cost tens of millions of dollars,” he explained.

The Minister also cited another case in Courtland/Fryrish, in another APNU+AFC controlled NDC, where an individual is claiming prescriptive ownership of more than 600 acres of NDC pasture lands for livestock owners.

“If you are genuinely representing people, do so without any political interference because the politics ended when you got elected. Now, it’s time for us to serve our people,” he said.

The Minister then called on NDCs to enhance their service to the people.